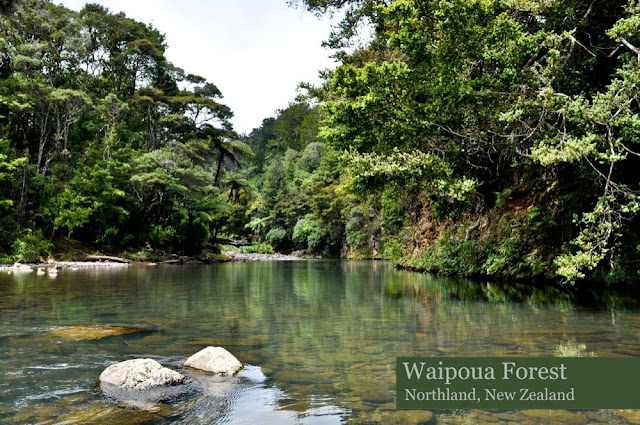 The north island of New Zealand is divided into several regions. Everything above Auckland is classified as the “Northland” and includes the Bay of Islands, Hokianga Harbor, and Cape Reinga (the northernmost point in the country).
On our first full day in the country, we got up early and hopped on the SH-1 out of Auckland. We stopped at a grocery store on the way and purchased a cooler, ice, and a bevy of picnic supplies. 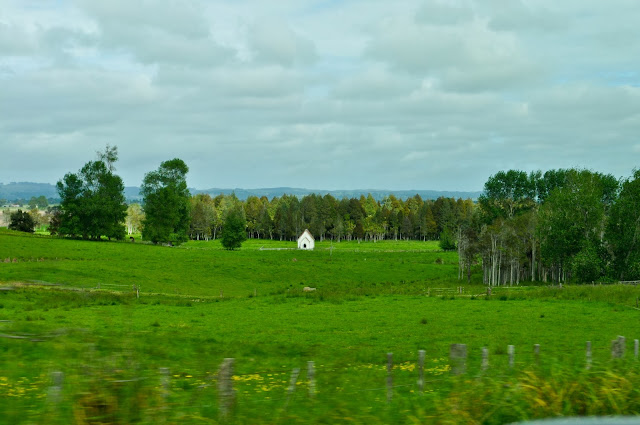 There are two main routes up to the Bay of Islands: East Coast or West Coast. We elected to take the much longer West Coast route north in order to do some hiking in the Waipoua Forest before arriving that night in the town of Russell (located in the Bay of Islands. Hereafter referred to as the BOI). Our plan was to then head south via the East Coast (which is also the shorter of the two) on our way to Rotorua. 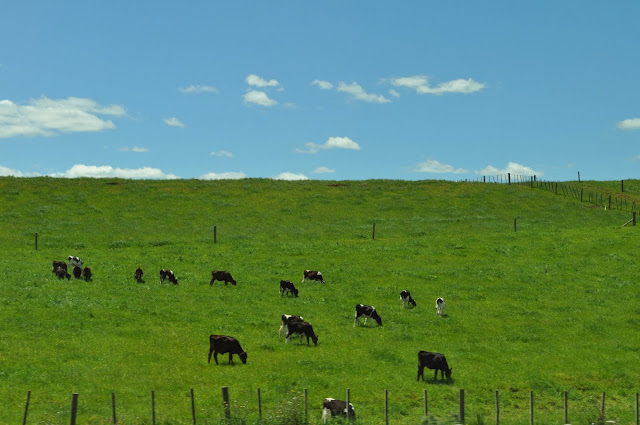 A few things to know about roads in New Zealand:
1. They’re small. Even SH-1 (the main highway out of town) was one lane in each direction, with occasional passing lanes.
2. They’re full of slow-moving lorries, RVs, and tractors.
3. Don’t rely on google maps to give you accurate driving times. The speed limit may be 100 km/hr but if it’s a dirt track on twisty mountainsides, you’re probably not going more than 30. We found this site to be more accurate.
4. There will, at some point during your driving travels, be livestock on the highway: 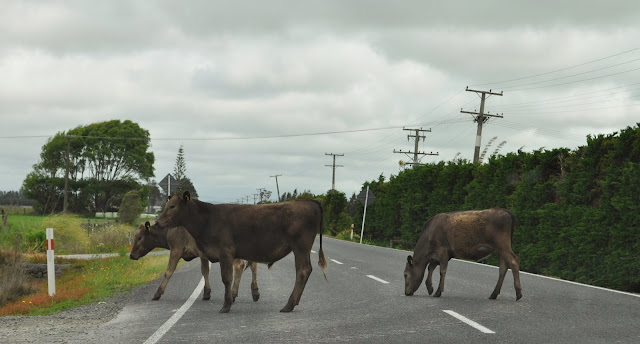 New Zealand is a country of prodigiously active farmers. You can’t go ten feet without running into a field or fence. The citizens, have also realized the importance of natural spaces and the unique beauty which encompasses this country: They’ve managed to put approximately 30% of their territory into national preserves and trusts, which is a very good thing, because every other remaining square inch in the country is used as actively managed land, most of it for the grazing of livestock.
We passed hundreds of miles that looked exactly like this: 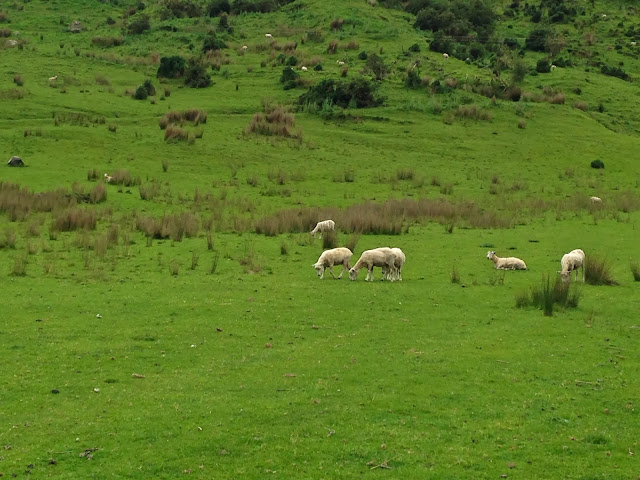 It’s terribly beautiful, bucolic, and charmingly pretty in a agriculturally-related kind of way. There are no big billboards on the highways, big box stores are limited to Auckland, and every town you pass through has a historic main street. There is a downside, too, of course: they fertilize the grass via crop dusters and you’ll see 100 cows standing in the middle of (formerly) pristine streams. They must have huge run-off problems, much like farming communities here in North America.
Coming from the United States, with its super-sized cities, stores, streets, cars, and wild spaces, it’s a bit bizarre to find yourself in a country were everything is smaller, very orderly, and highly managed. Even the forests of pine trees, which provide wood for the majority of the buildings, were planted in precise grid patterns, each tree trimmed and standing at attention like players on a chess board. For a girl from the vast forest regions of the Pacific Northwest, I found the planned forests to be ever-so-slightly unnatural. But the lack of huge highways and malls was absolutely delightful.
The national and regional parks are an entirely different story, however: they are a glorious cacophony of wild, untamed and exotic jungle spaces. Simply breathtaking. This is New Zealand at its very finest! 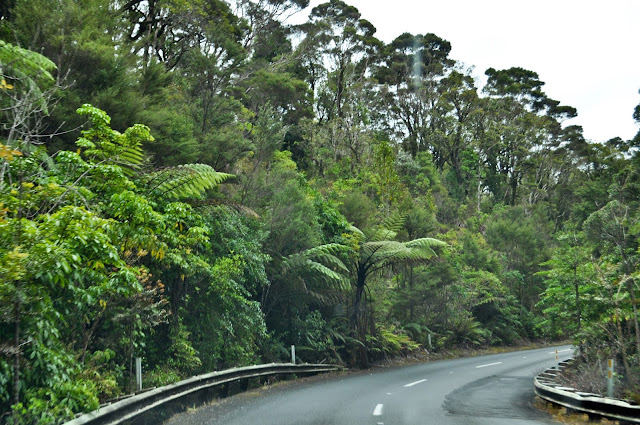 SH-12 runs straight through the Waipoua Forest and it is a truly spectacular drive. 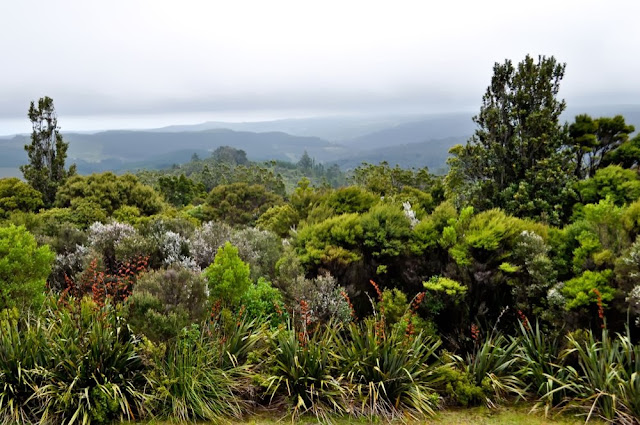 We stopped off at an observation town for a proper view: 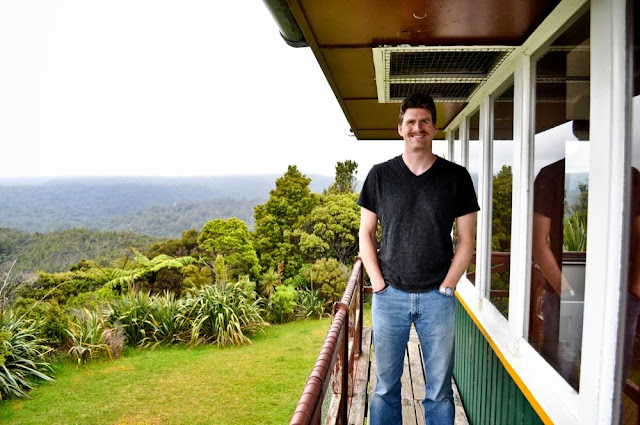 It appears that the visitor center is undergoing a renovation, which is a mighty good thing as there wasn’t much guidance in terms of hiking or history of the park. 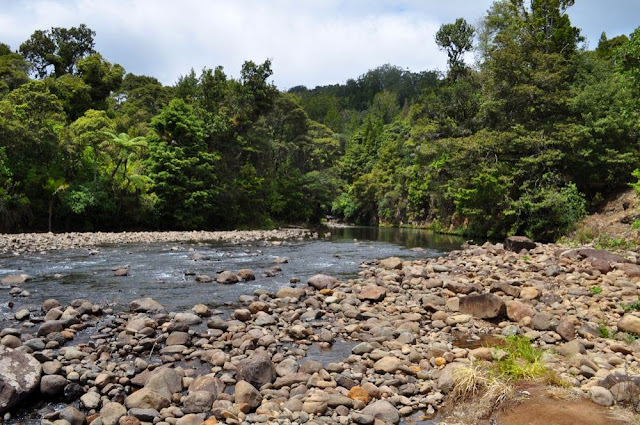 Be sure to stop by the picnic area for a bite of lunch as it’s a grand place to view the river and tropical vegetation. 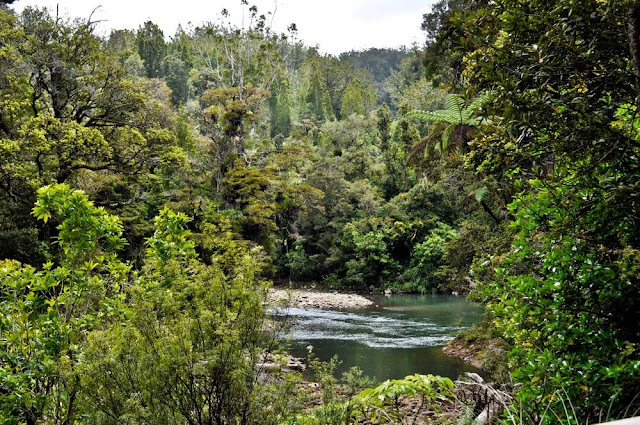 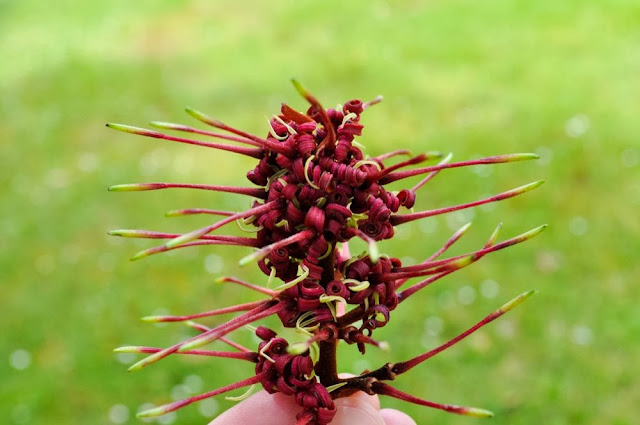 This park was created to preserve the last remaining swathes of Kauri trees, the giants of New Zealand. A single tree can reach over 180 feet in height and have a trunk diameter in excess of 15 feet in diameter. 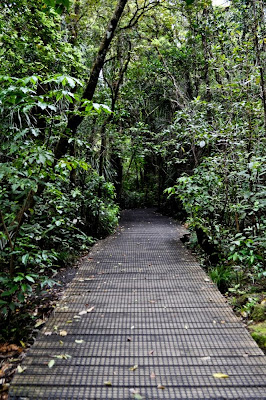 Here is the largest, Tane Mahuta. It is estimated that it came into existence around 2,000 years ago. 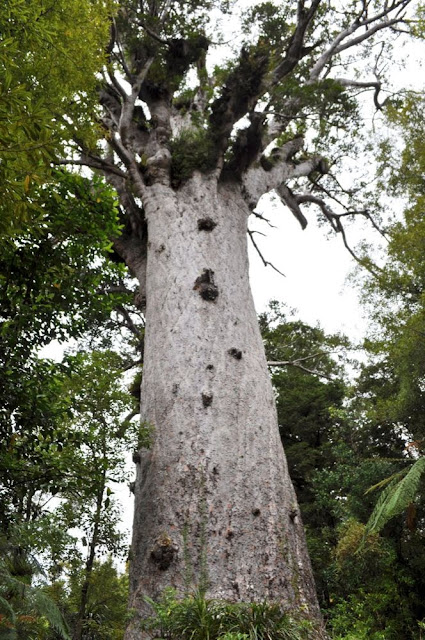 I was a little disgruntled because the walk to Tane Mahuta was only five minutes long and the viewing platform was occupied by a guide (and his tour bus full of tourists) that was not inclined to let non-group members in for a proper viewing. We should have then headed back to the “Four Sisters” and Te Matua, down the road. But it was getting late and we still had a few hundred kms to go before finding our bed for the night in Russell. Next time. 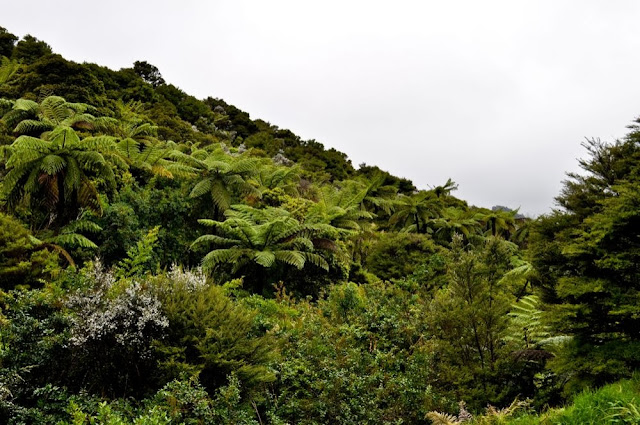 Visitor’s Center – they have a very small but decent summary of the region’s history, including the logging and gum industry operated by the early settlers. Have a picnic lunch here by the river as there are few pull-outs along the road that afford river views.

Drive up to the Lookout – (located within a km of the visitor’s center) Climb up the (short) ladder to the tower for a great view of the forest and take a short walk along the trail. Be aware that the road is unpaved and RVs aren’t allowed.
Hike to Te Matua Ngahere and the Four Sisters – Wish we’d done this hour-long hike as we skipped it in favor of Tane Mahuta.
Walk to Tane Mahuta – It takes all of five minutes and is worth seeing. Also, the parking lots have the last bathrooms before heading north out of the park. Appropriate for those with mobility issues and wheelchairs.