February 26, 2015 Sonja Leave a comment
In November 2013 we spent five nights at Lomani Island Resort in Fiji. We had a great time, particularly enjoying the many activities the island has to offer. More pictures of the island and our adventures can be found here. 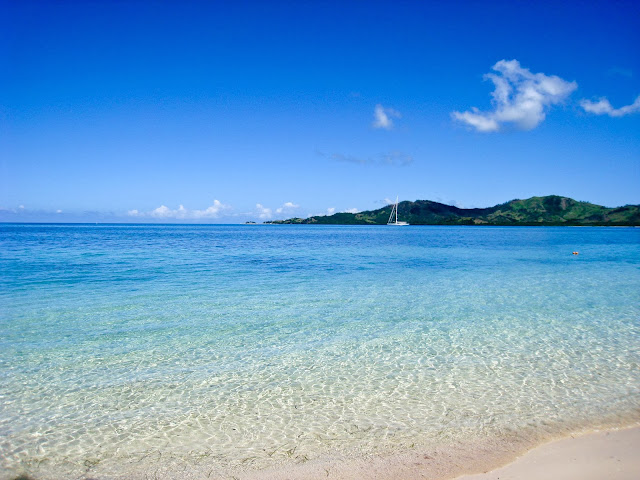 Here are the details:
The first night we stayed in Hibiscus Suite #9. 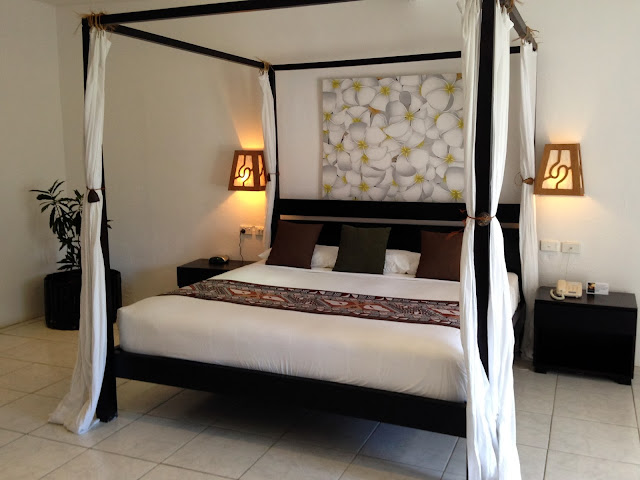 Firstly, I should mention that Lomani graciously let us stay here at the cost of the Deluxe room as all the Deluxes were full at the time of booking. On the second day we moved into a different room further down the beach.
Although palatial in size (three sitting areas!), the Hibiscus Suite was looking a bit dated, particularly the bathroom, which only had a barely functioning shower head. The view of the water was partially obstructed by the water sports activity hut and it was set fairly far back off the beach. It was also the room closest to the restaurant/check-in area although we didn’t have any problems with noise. The outdoor shower was nice but probably not worth shelling out the big bucks for on that feature alone.
Our guess is that it’s next in line for a bit of a cosmetic face-lift, given that many of the other rooms appear to have undergone similar transformations. 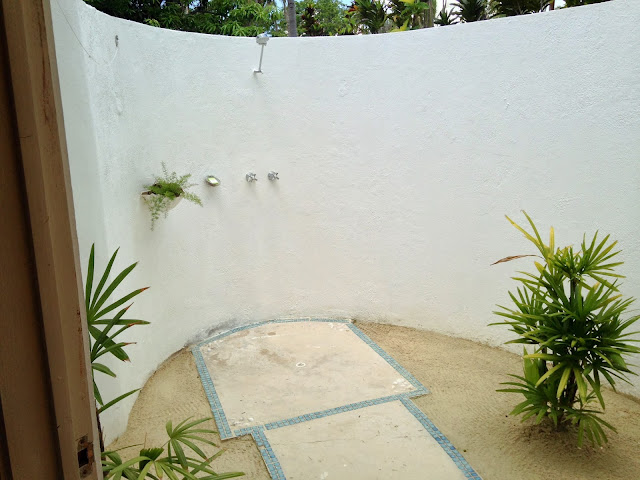 Nights 2-5 were spent in Deluxe Suite #2, which was part of a two-story building set fairly close to the water (with great views!). 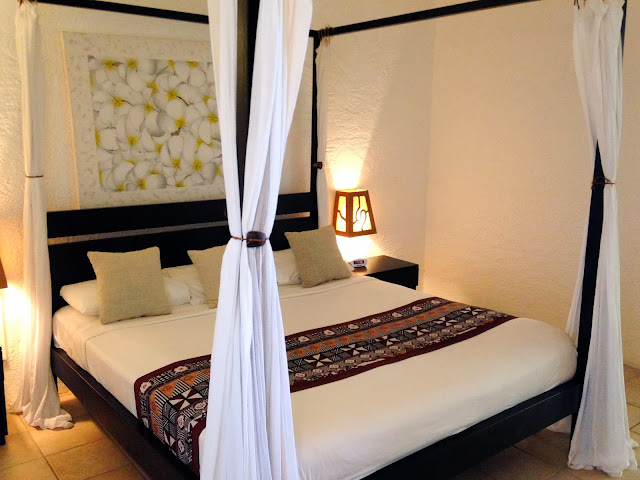 Comprised of a bedroom, bathroom, and living room, this unit was on the ground floor of a 8 unit building. It was fantastic. 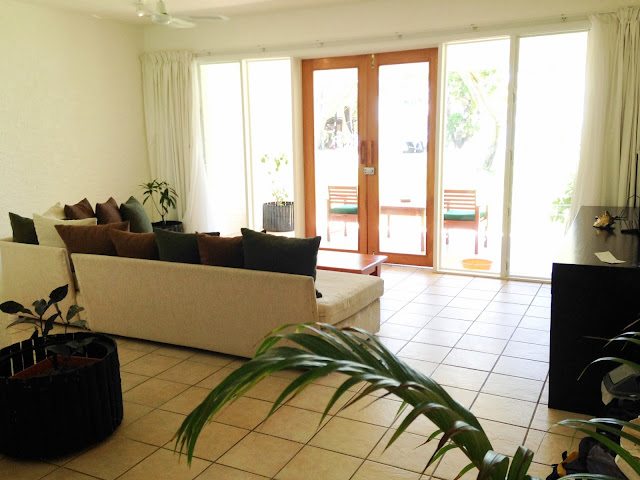 TV (lots of movies but no channels), a fridge, and aircon (a must have in November) completed the unit. Simple but perfectly adequate. 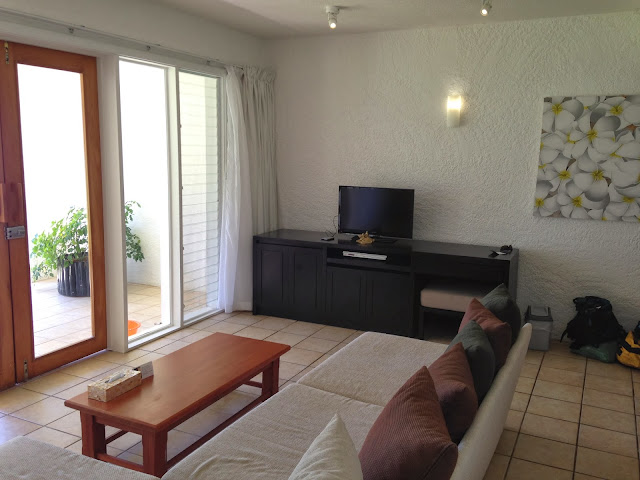 It also had a snazzy new bathroom (and a working shower!). 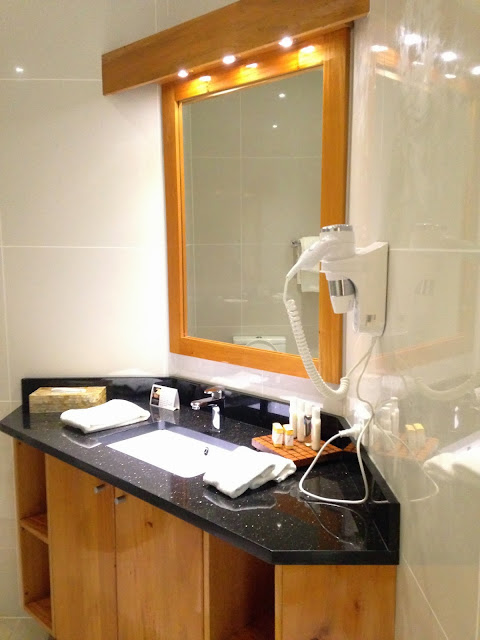 Although it was an eight unit building, noise wasn’t an issue for us, except when the maids were cleaning upstairs. Not a big deal at all.
Here is the Lomani Island Resort Layout. Hibiscus Suite (#9) and Deluxe Unite (#2) are visible to the right of the pool. Please note, however, that the layout of the unit numbers in the Deluxe building is incorrect. Unit #1 was at the far right, bottom floor, and Unit #2 was the second from right (also bottom floor). I’m not sure how the numbers went from there but I’d guess that #s 3 and 4 were also on the bottom and that #s 5-8 were on the top. 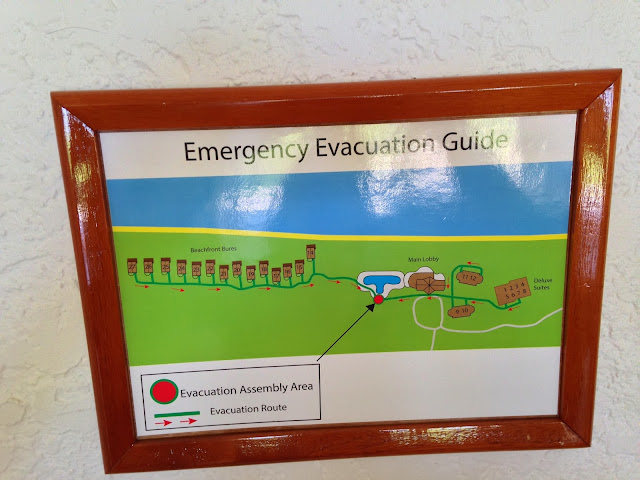 Had we been on our Honeymoon or born filthy rich, we probably would have sprung for one of the private bures (cottages) as they looked absolutely lovely. However, given the price tag of $525 USD a night, that wasn’t in the cards for us! Maybe when we win the lottery. 🙂 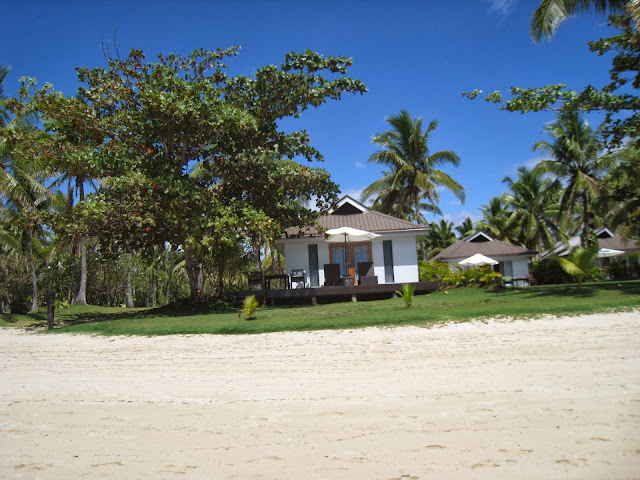 The great thing about Lomani is that it’s a fairly small resort: only 26 rooms. It’s also spread out so there was never a feeling of being too crowded. Oftentimes we were the only people on the beach or in the pool. 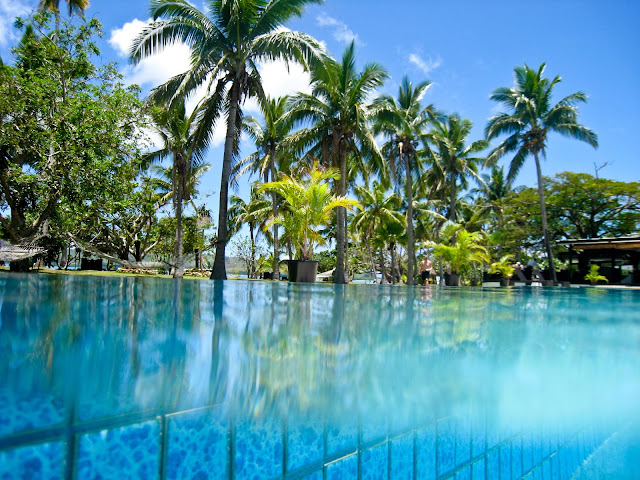 Those daybed loungers were in high demand, however. You had to stake those out around 11:30 to claim your spot. 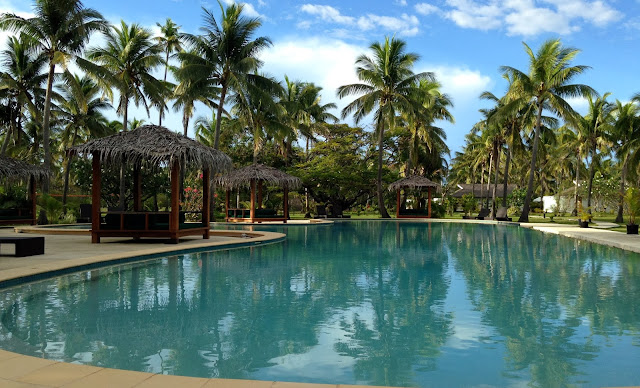 ACTIVITIES
The daily complementary activities were the highlight of our stay. We stuck mostly to the water-based excursions so we can’t speak to the quality of the village tour or art walk.
Snorkeling on the reef was great fun – just don’t expect fantastic corals or fishes. We heard that the reef took a beating during the December 2012 cyclone. We did see a few rays and sand sharks, which made things a bit spicier. Visibility was decent, although not exceptional.
We also did the dolphin cruise which was nice because we got to see some of the outer islands, but didn’t spot any sea-based mammals. A couple that was with us on the boat had gone the year previously and had a great dolphin adventure so perhaps we just had an off day. 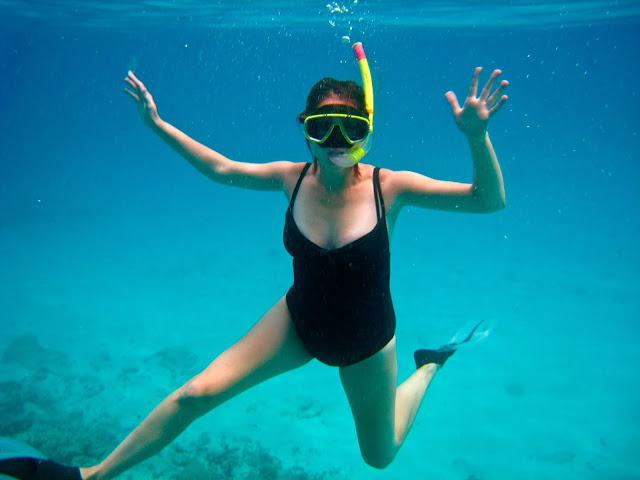 Hand line fishing – so much fun! We caught a few things and the chef graciously cooked up our biggest specimen that night for dinner. It was beyond delicious. 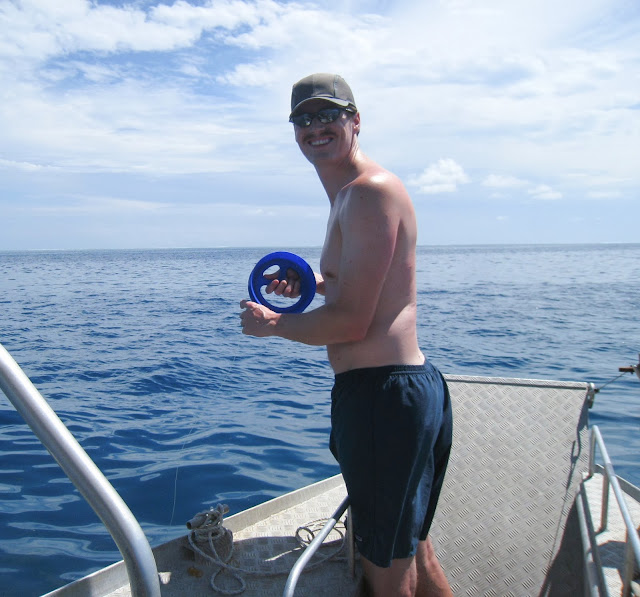 Bicycles – we took a nice little jaunt around the island. Go in the morning because it’ll be way too hot in the afternoon (at least in November). 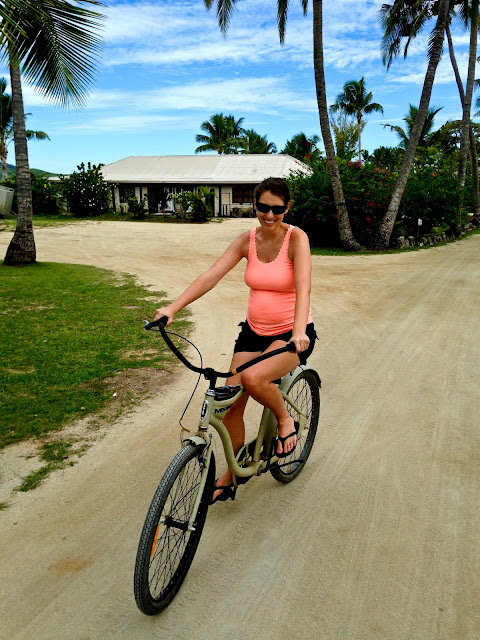 Polynesian dancing. They did fire dances. It was great. Enough said. 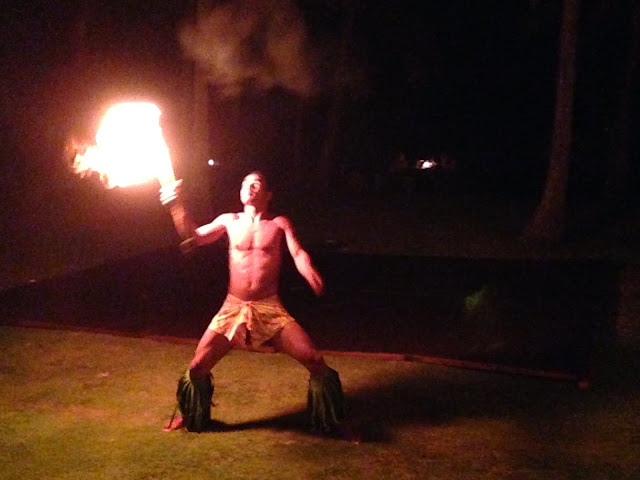 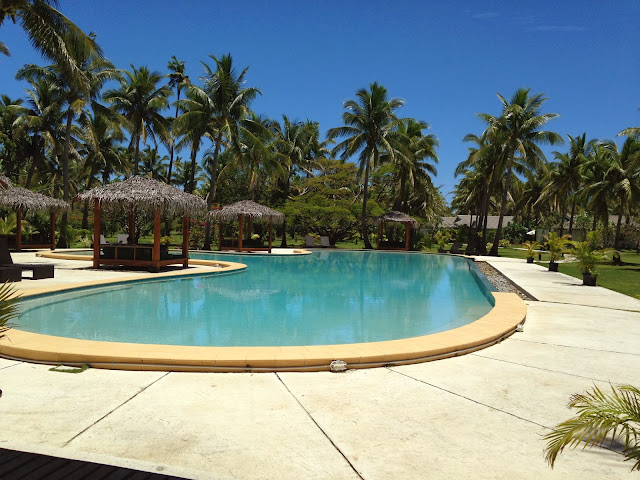 We always did the morning activity, which ended around 11:30ish. We’d head directly from the boat to one of the giant day-beds at the edge of the pool. From there we could take a dip, do a bit of reading, and order lunch (by pushing the call button or zipping into the restaurant). Since it took so dang long for the food to arrive, it was nice to be reading poolside, rather than sitting (twiddling our thumbs) in the restaurant. A quick note though: We found that they only answered the call about half the time. We got a huge kick out of the fact that the little sign next to the button said: “Push button for IMMEDIATE assistance!”. Not the case! By the end of our stay, we wouldn’t even ask for the menu as it would take another 15 minutes for the server to re-appear. We’d order everything the first time he arrived and then push the button again when we were ready for dessert (which we’d pre-ordered). Also, don’t expect your dirty dishes to be removed. We would park them off to the side of the lounger as to not have to stare at them all afternoon. Same with breakfast dishes. Those will sit outside your room all day until someone comes ‘round for them mid-afternoon.
The highlight of our stay at Lomani was going hand-line fishing in the afternoon and then having the chef cook our catch that evening for dinner. It was incredibly delicious – the chef really outdid herself. I’m going to think fondly of that rock cod for the rest of my life. Well done and thank you Chef Patricia! 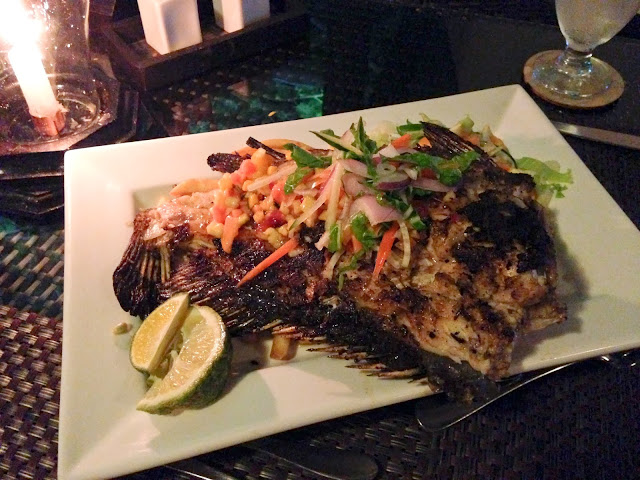 Other Odds N Ends
Ok, that should do it! I’ll add more if anything else pops up. Again, more pictures can be found here.
xo,
Sonja
November 20 2013
Fiji Fiji, Hotel Review, Oceania