I’m in the process of updating my travel pages and decided that a list of resources for our Africa trip would be useful. We had a great experience and would definitely recommend both the Zambia hotel and the Botswana safari guide. 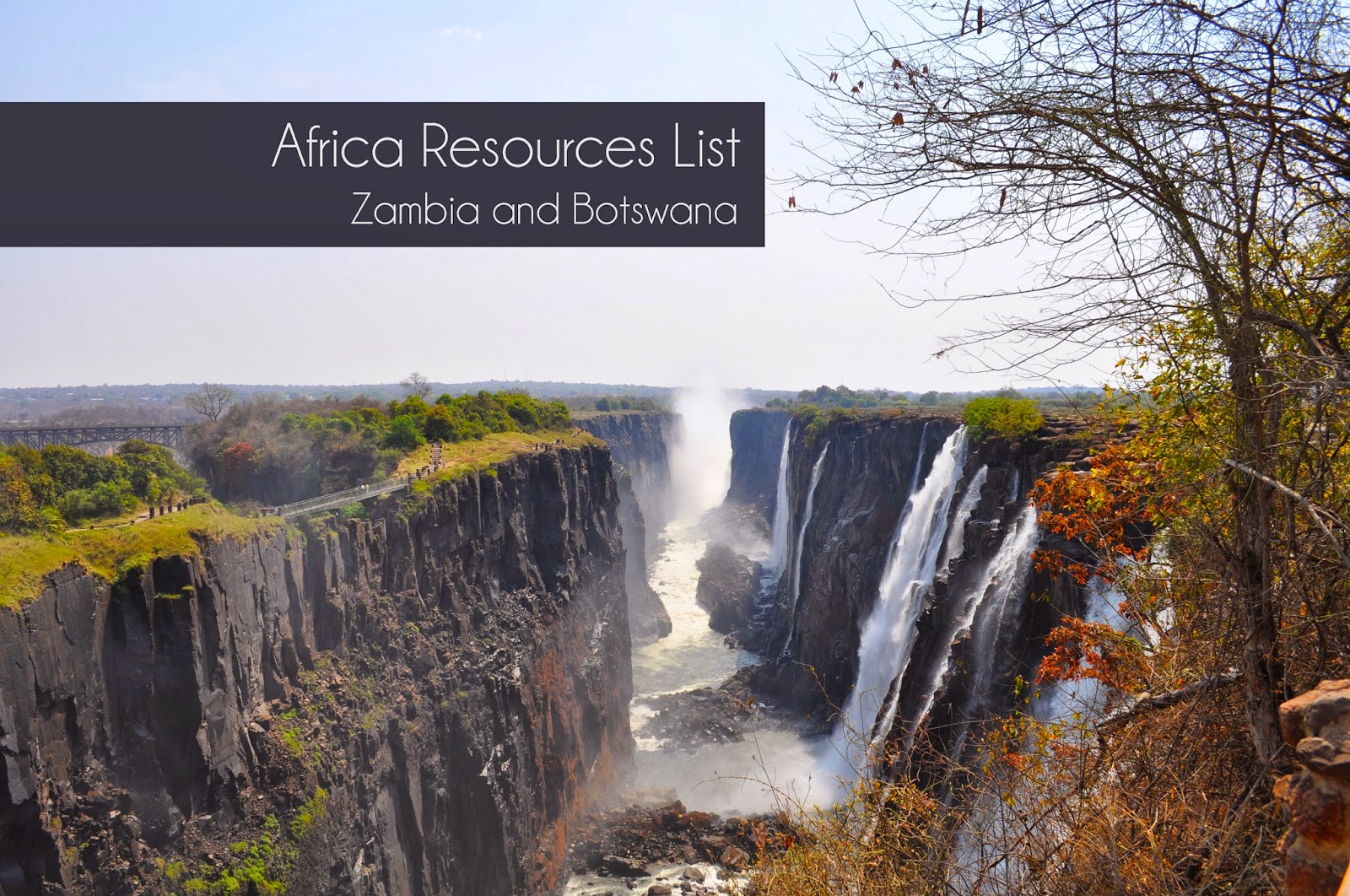 First, a note about travel costs.

A close family friend has traveled to Africa many times and had some sage advice for us before we began planning our trip:

There are two kinds of safari travel in Africa: a) self-catering parks that are open to everyone and b) private reserves that cap their visitor numbers, but charge exorbitant fees.

South Africa, Tanzania, and Kenya have done an amazing job of appealing to many visitors and it’s relatively easy and inexpensive to visit their parks. A guide is not even a requirement for many of the larger areas. This appealed to us, especially as we originally wanted to include a climb of Mt. Kilimanjaro (Tanzania) in our trip. We still want to do that, someday.

The drawback to this type of travel is that you  might run into this: 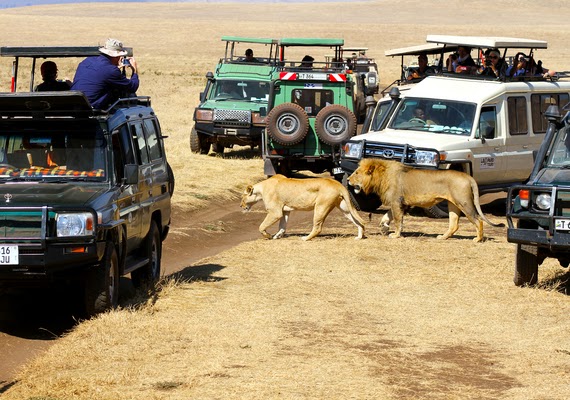 As in, lots of people.

Our friend actually steered us towards Botswana, because they’ve gone entirely in the opposite direction. Most of their land is held by the government in managed reserves that they rent out to private companies on a long term basis. Numbers of visitors are capped by the lease agreement and a guide is required at all times. The benefit is that you have vast tracts of land occupied by very few people – you have the place entirely to yourself. Botswana has argued that it’s significantly better for the animals and the environment as there are fewer people and consequently less needed infrastructure. The downside is that it’s shockingly expensive, as they’ve got to make up for fewer revenue-generating tourists.

Our safari was $5,125 per person and included the 10-day safari and two nights at Tongabezi Lodge. We nearly hyperventilated when our booking agent sent us the estimate.

But the solitude was delicious. Imagine days of trekking through the bush, bumping down dirt roads, and enjoying a gin and tonic beside a quiet river. Only a few other times during our safari did we meet another jeep. 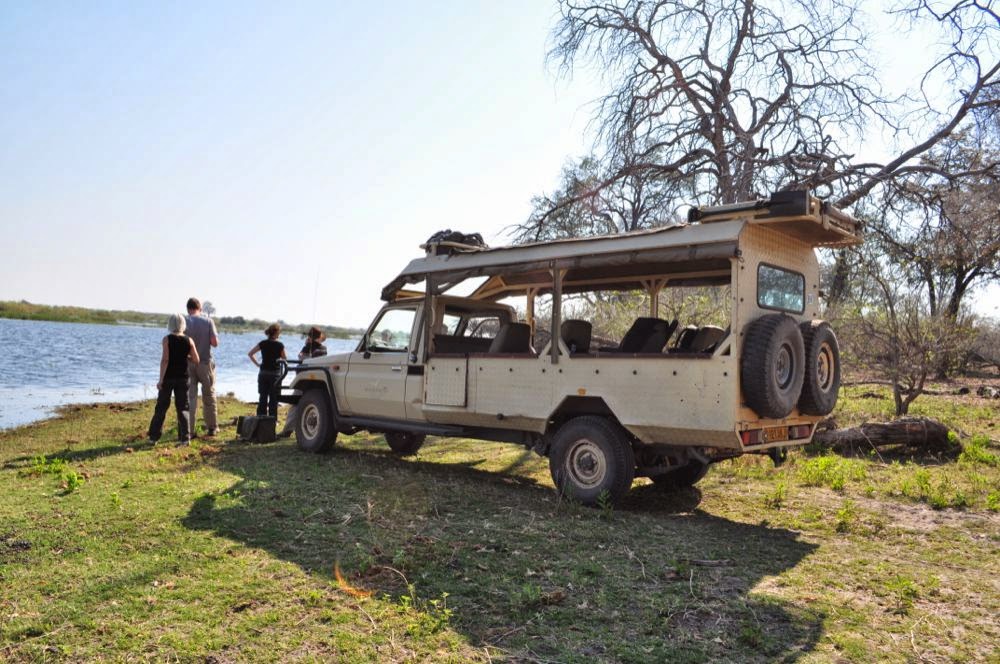 The tour company that we used was called Wilderness Safaris and they were excellent. They lease several private reserves throughout Botswana and they even have their own airline to shuttle visitors between camps. 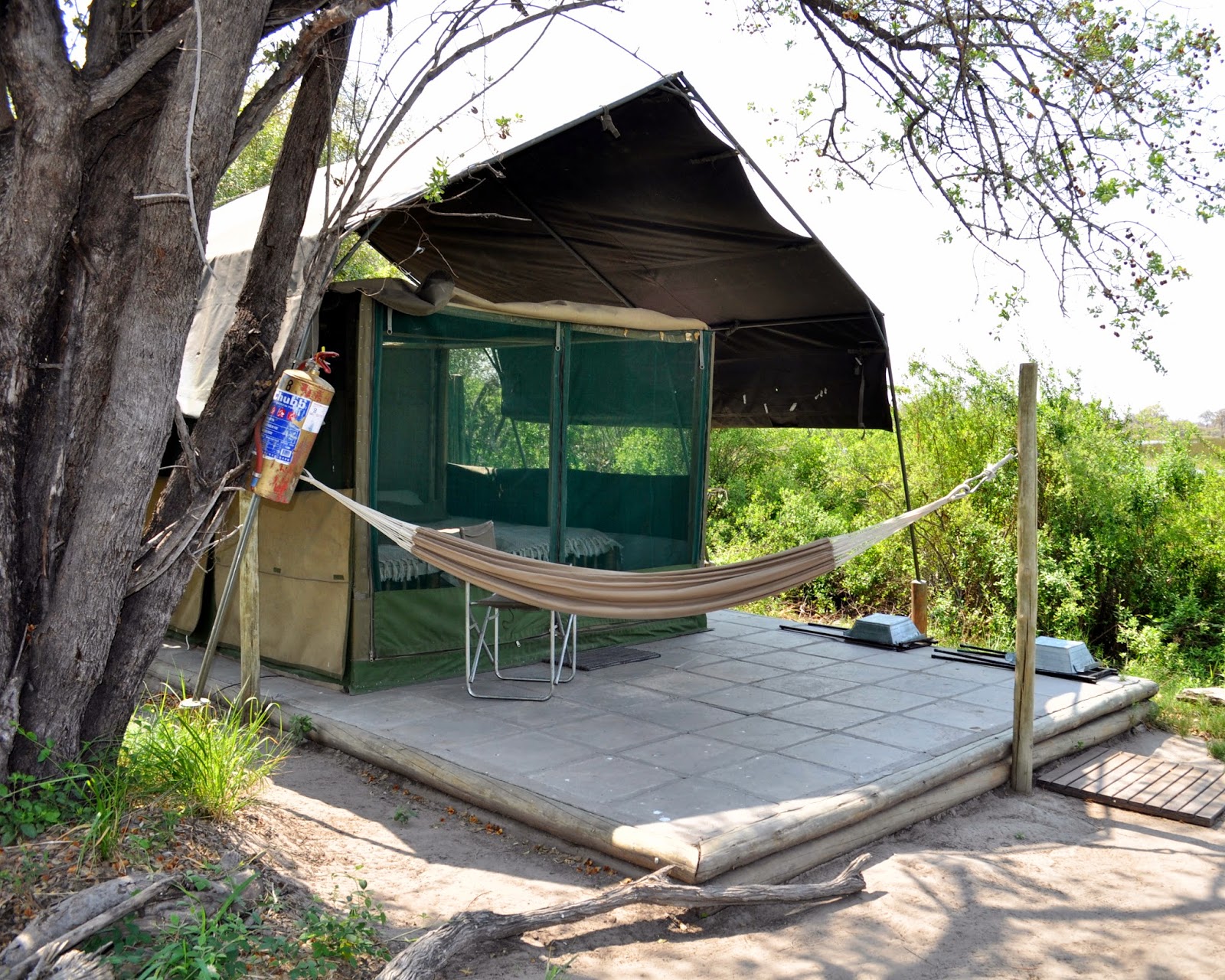 We journeyed on their cheapest adventure safari.Camps are spartan and composed of military tents and large jeeps. More luxurious safaris are available; some of their camps come equipped with private cabanas, plunge pools, and private jeeps/guides. Additionally, we were on a group tour which is always a bit of a risk as you never know who you’ll end up with. We lucked out and scored an awesome group of Aussies and Germans. Our guide Russell, was South African, and all the local guides were from Botswana. 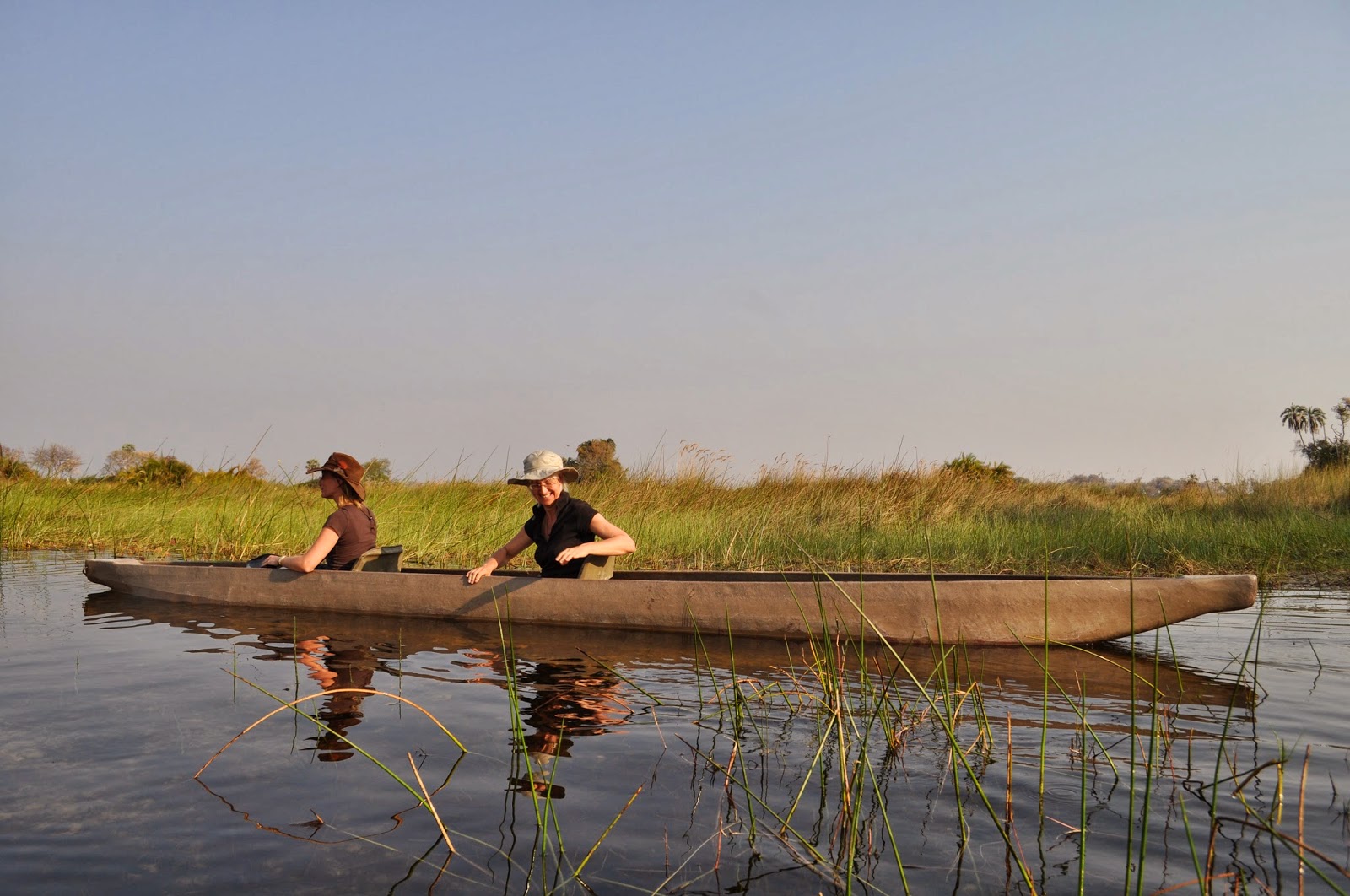 Our accommodations ranged from movable military tents at Linyanti to the more permanent structures (see below) at Selinda Camp. 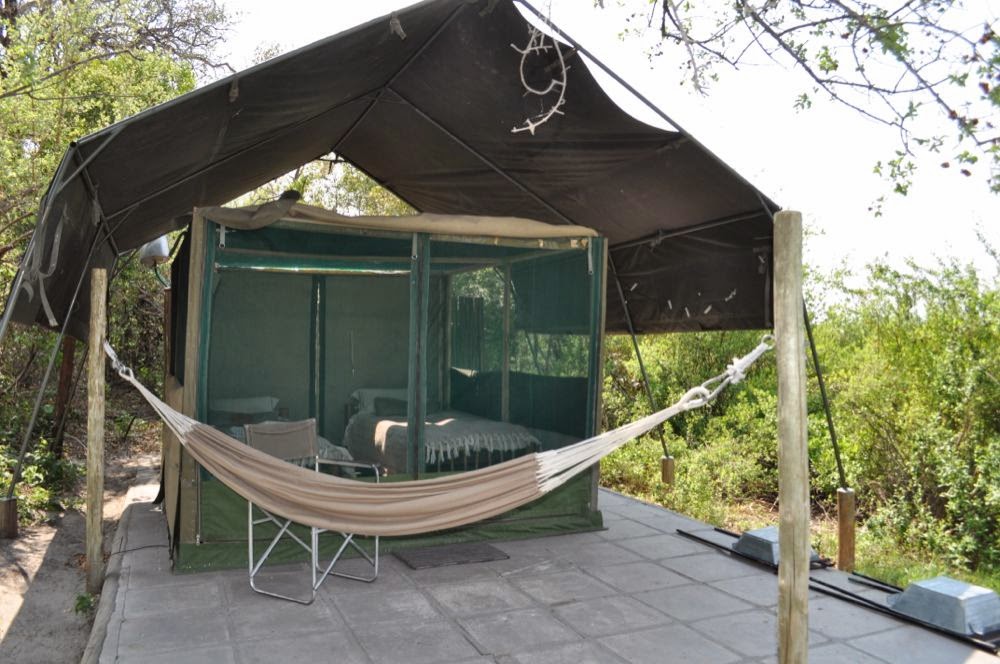 Beds were simple cots with down duvets (it gets cold at night) and a few camp chairs/hammocks. 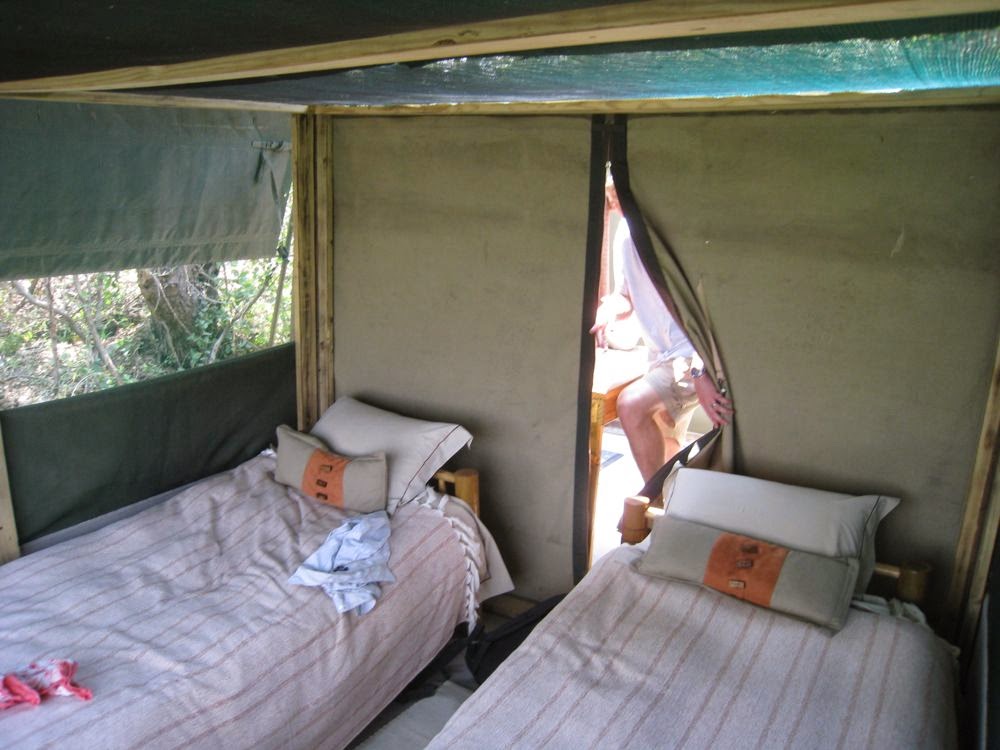 Ready for a shower? Fill up your bucket. 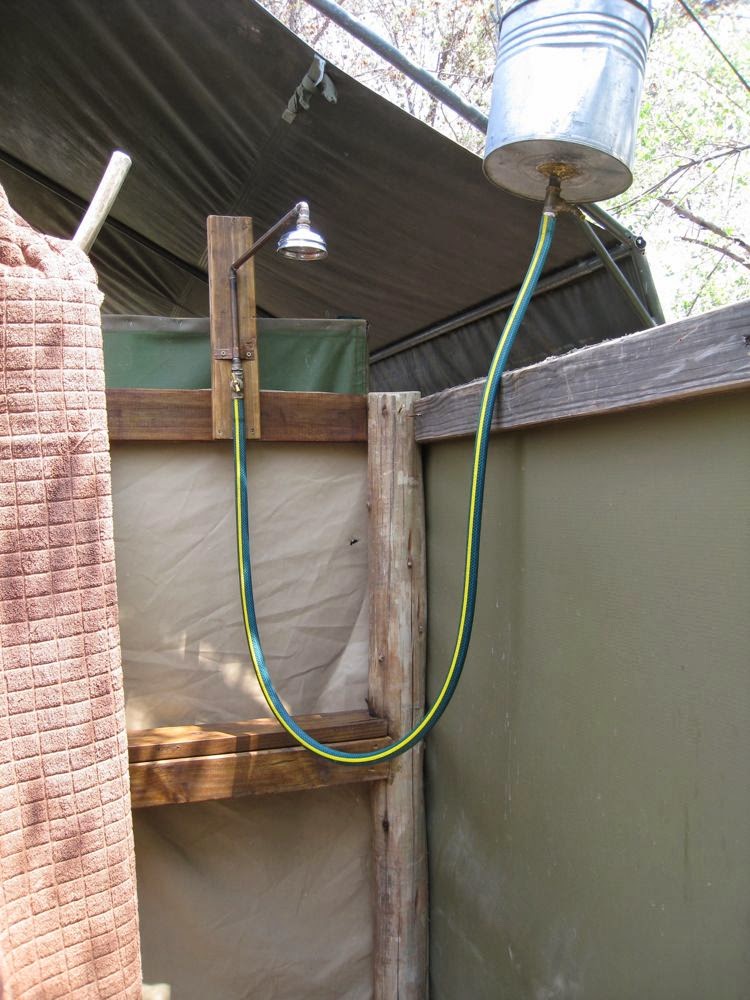 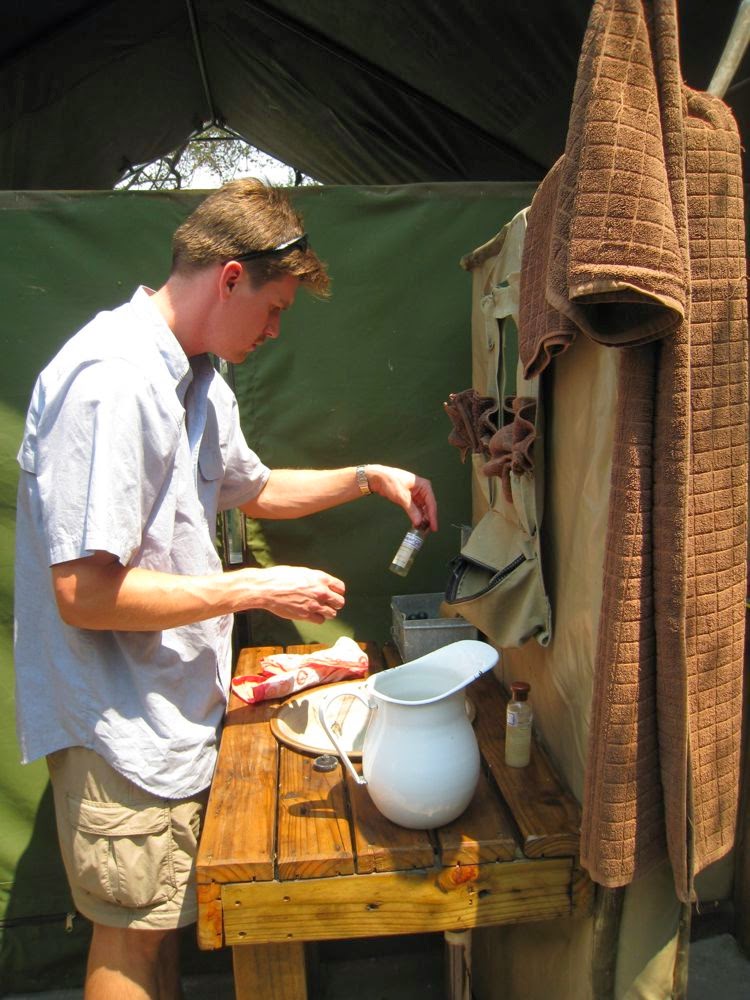 My single best piece of advice for safaris in Africa: find one that has an ensuite bathroom attached to your tent. You’ll probably, at some point, get sick with a GI tract malady and it’s exceptionally nice to have a bathroom near at hand. Shared pit toilets are definitely not ideal. Our camp at Linyanti had outhouses; but Selinda Camp (where Chris got sick) was blessed with a private restroom. 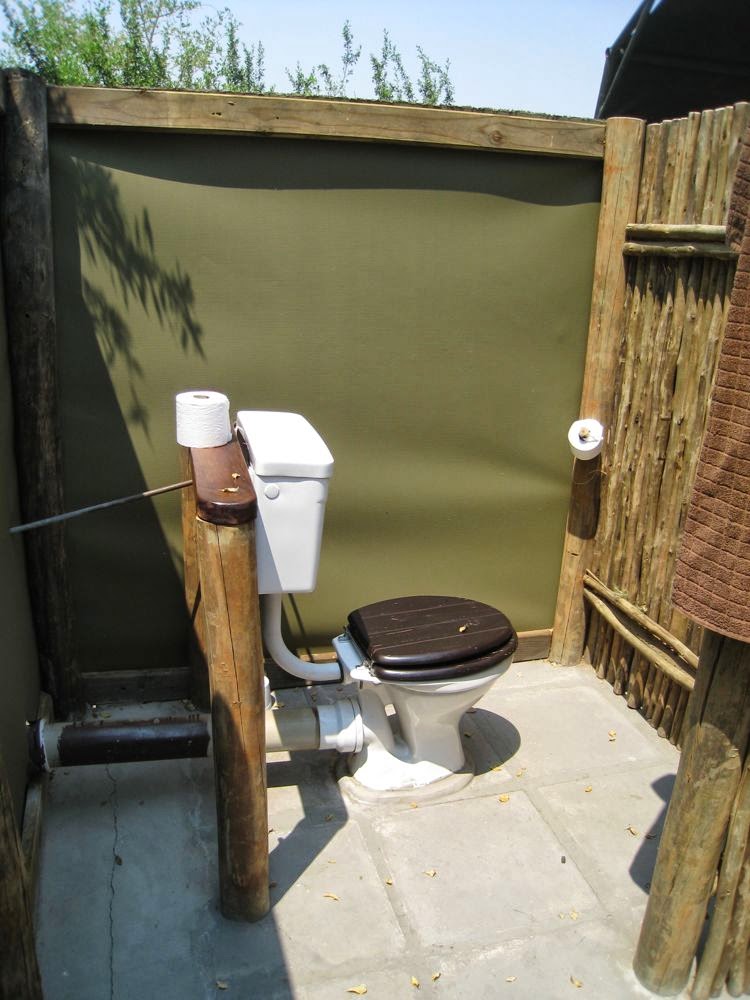 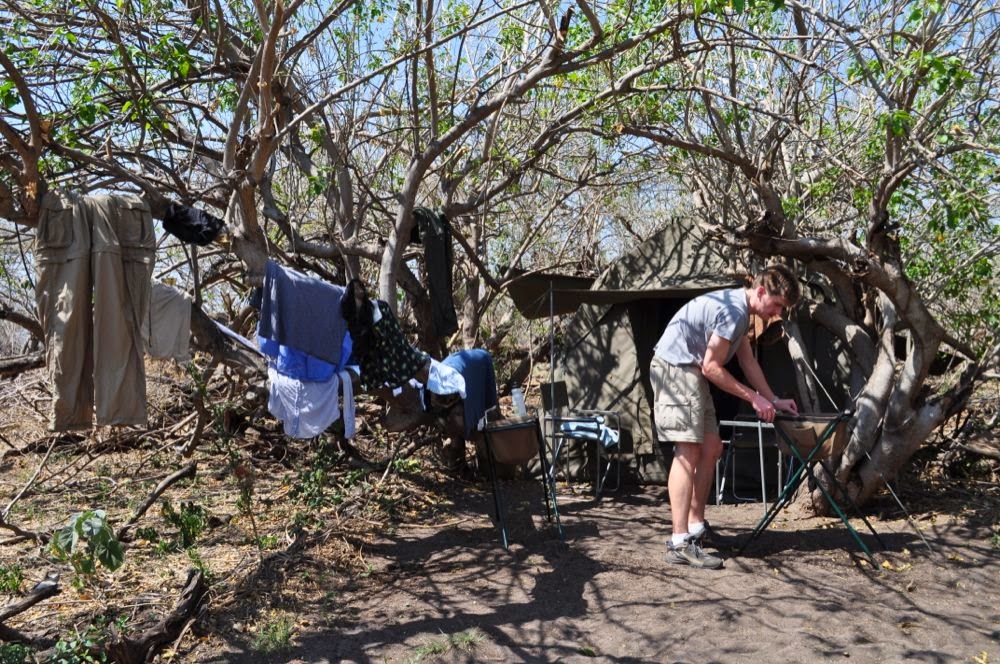 Meals are frequently served outside and all safaris usually include a morning tea and a sundowner served while out in the bush. 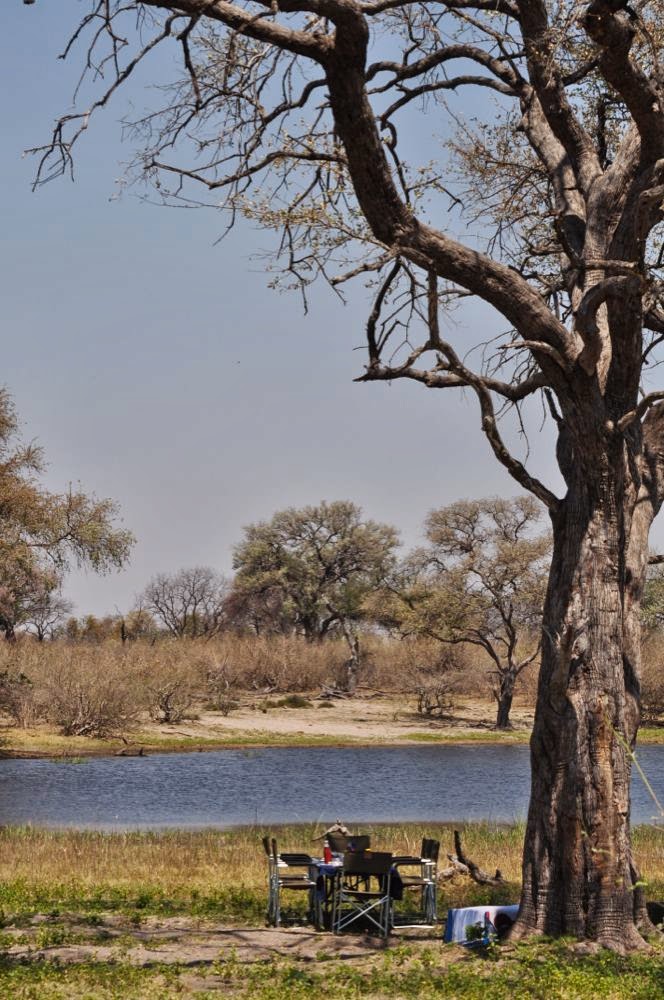 A daily routine is typically set up as follows:
-Quick breakfast
-Early morning game drive, including a mid-morning stop for tea
-Lunch
-Siesta
-Late Afternoon/Early Evening game drive, walk, or boat trip
-Long, leisurely dinner
-Possible night time game drive
Repeat the next day. For us, it included long hours in a hot jeep, which is primary reason that I would not recommend our tour for young children. 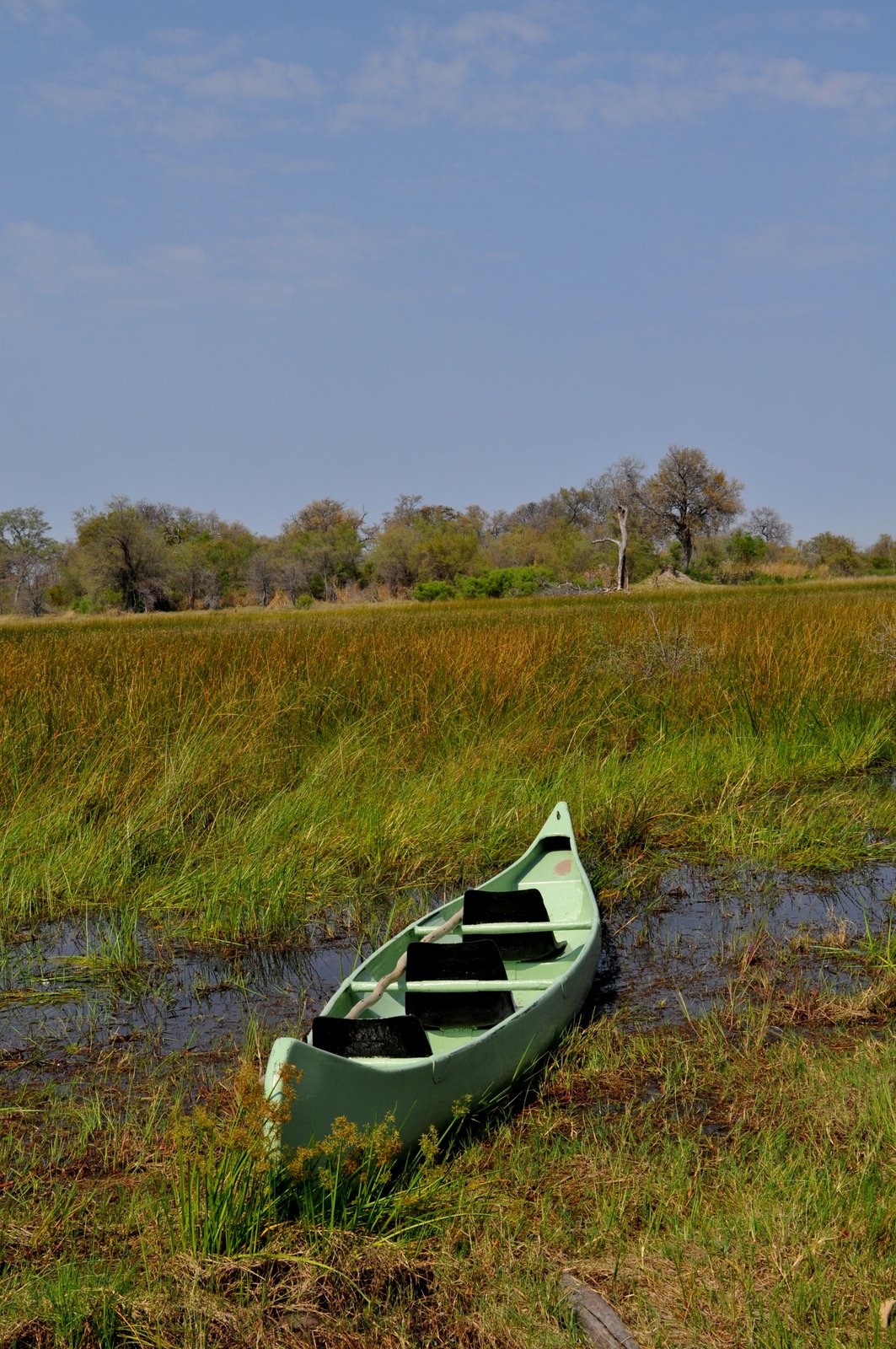 To accommodate our large group of seven, we had an extended jeep that was open on the sides but equipped with an essential overhead canopy. There was ample leg room and a cooler in back. 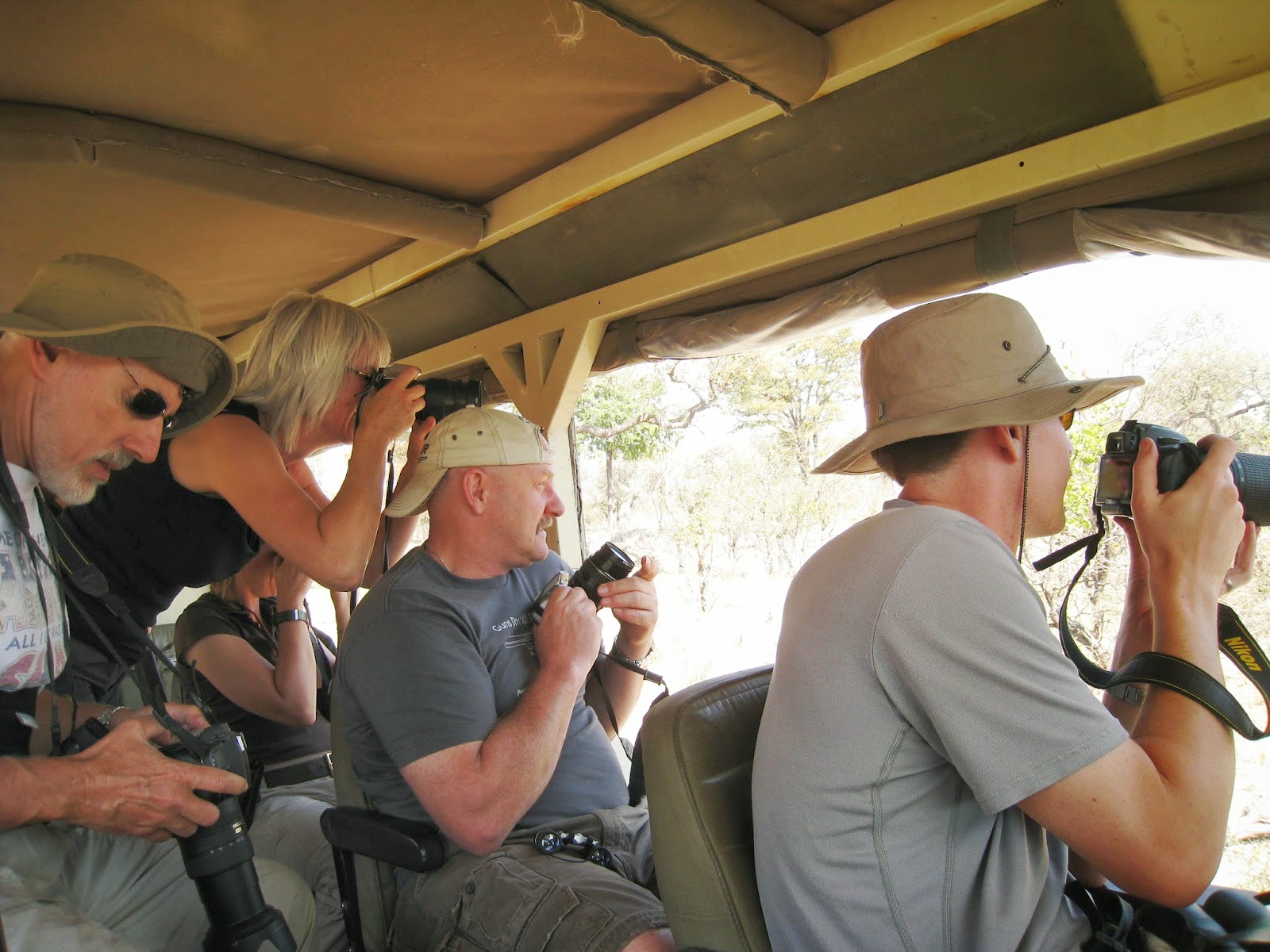 We liked it, but it got stuck a lot, likely due to that long wheel base! 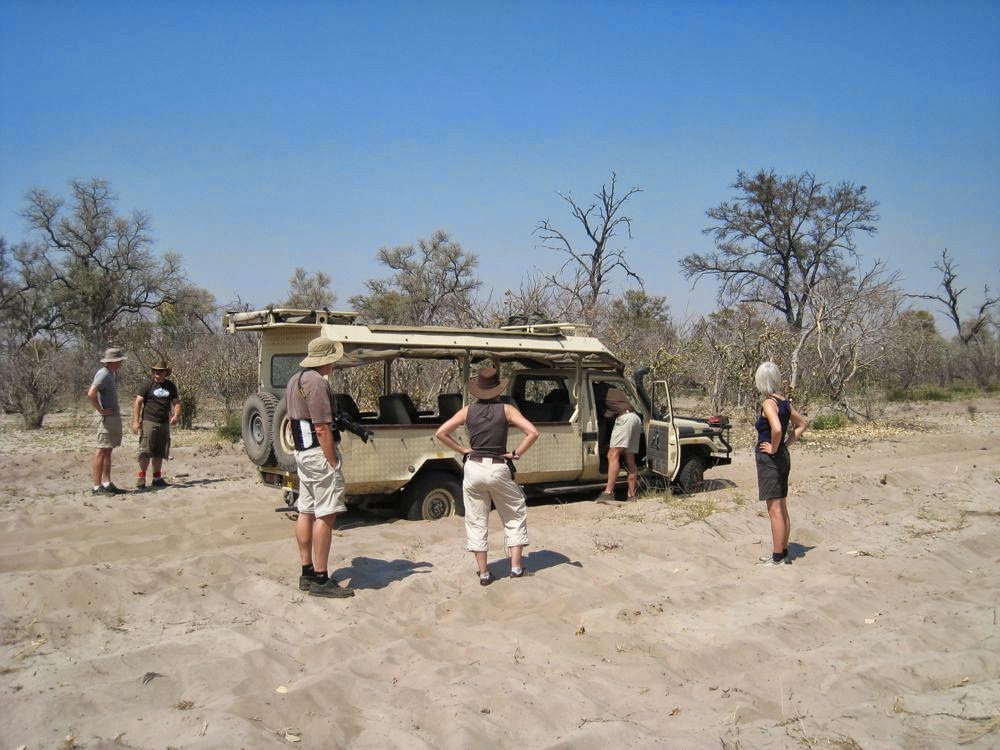 Eventually we stopped counting the number of times we piled out to begin a dig-out. 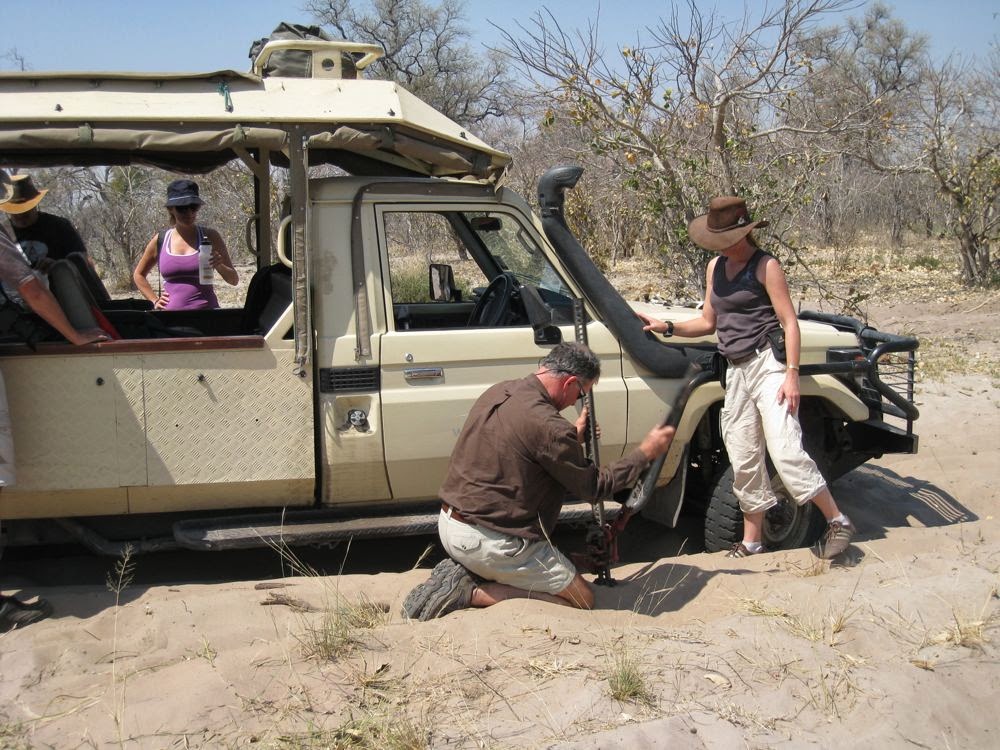 I use the term ‘we’ loosely. Our guide Russell was a master at getting us unstuck and did 99% of the jacking and digging. 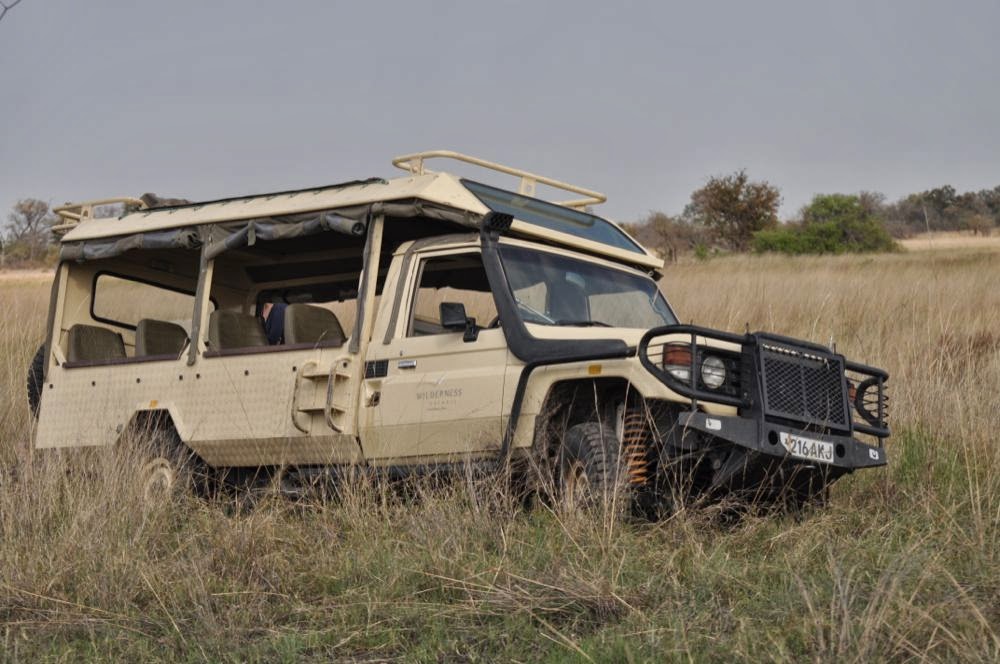 Swamp, sand, hole: you name it. We became well acquainted with the jack. 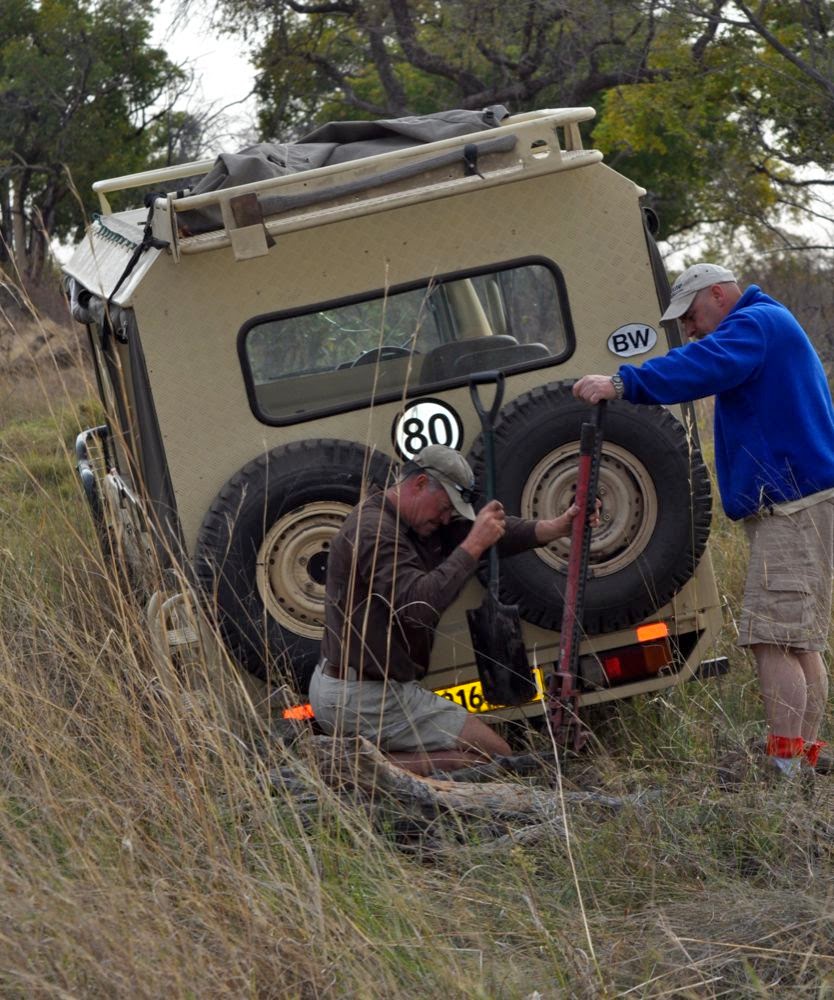 One thing that you’ll love, although it’s a bit nerve-wracking at first: How close you get to the animals. 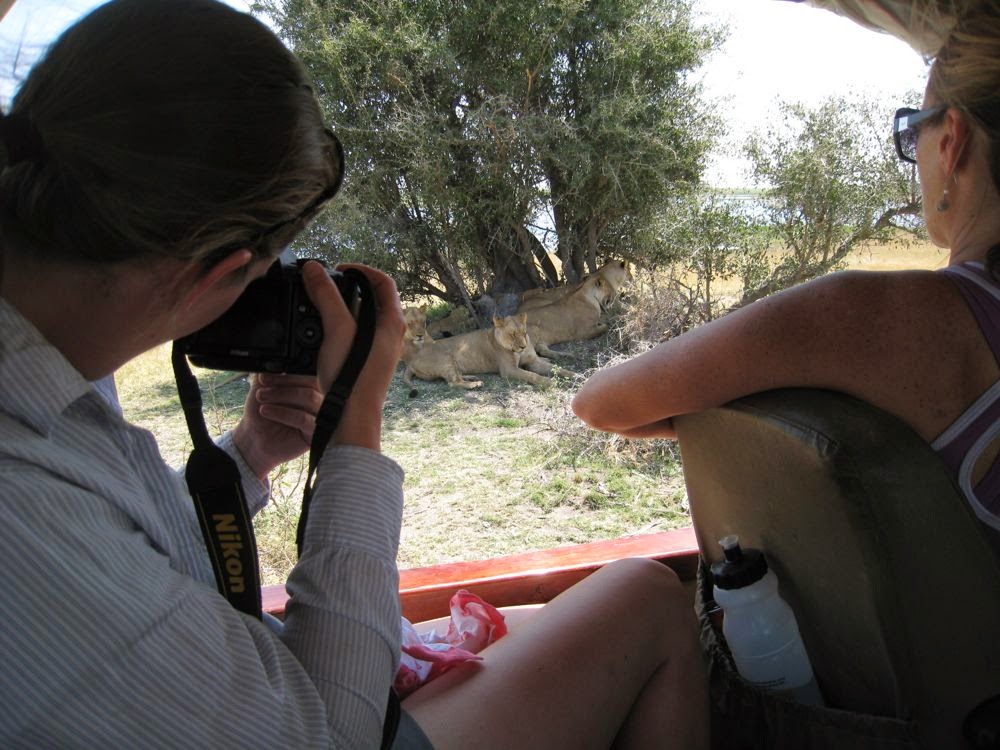 A pride of six lions 15 feet away? With no windows on your jeep? No problem.

No problem, that is, as long as you’re sitting down. Stand up in the jeep and you’ll see six pairs of eyes suddenly snap in your direction. It has something to do with the animals seeing you as part of the vehicle until you make an effort to separate yourself (by standing up or getting out) that draws their interest. 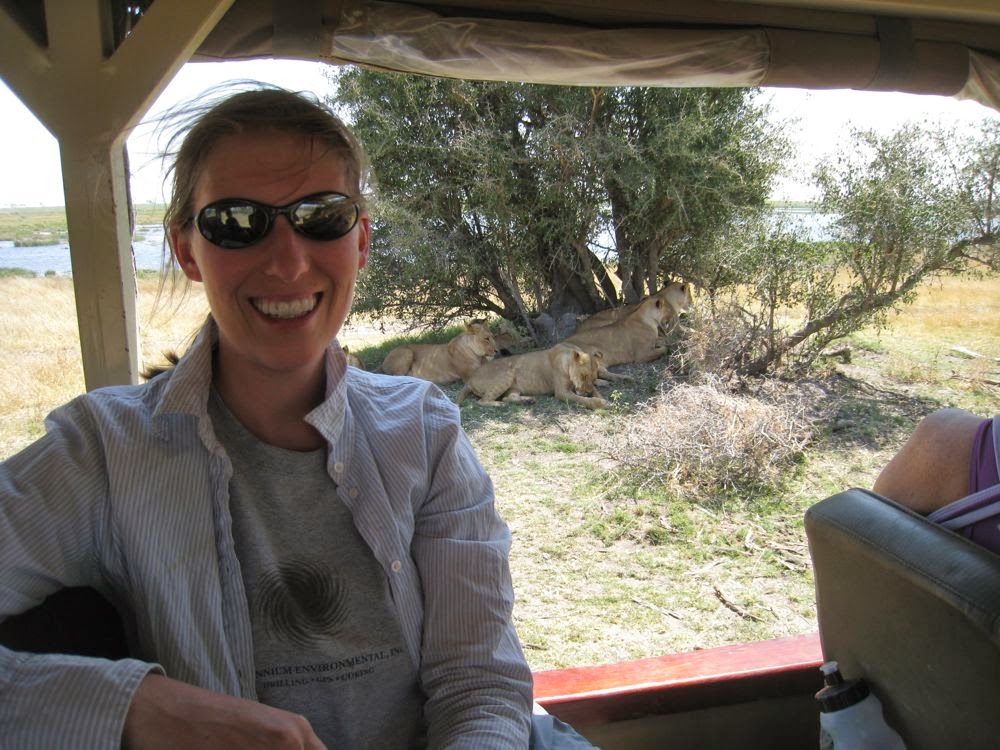 Wilderness Safaris has a number of small planes that they use to shuttle passengers between camps as there are few roads in this part of the country. 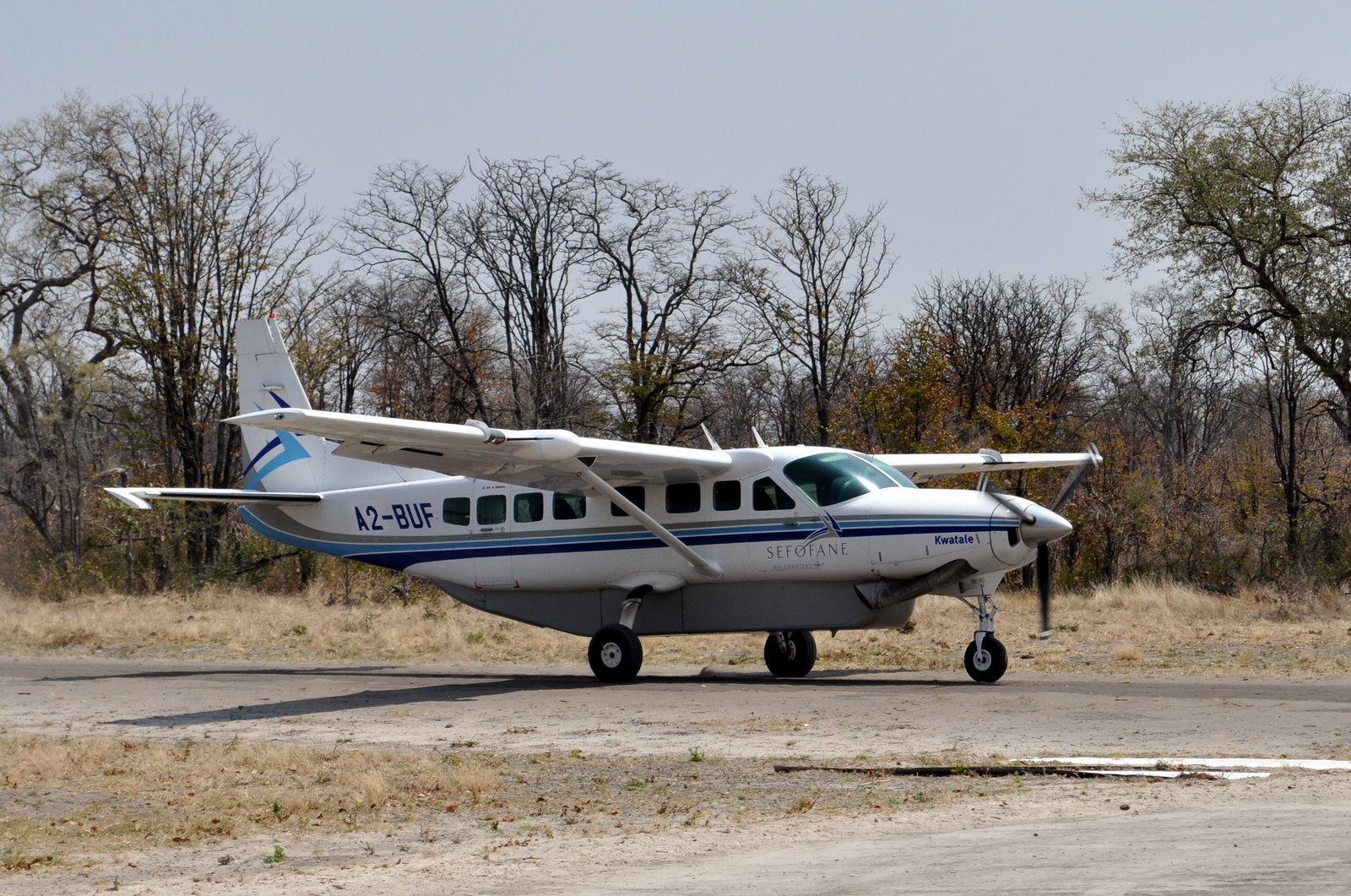 It’s not often that the pilot will also load your luggage. 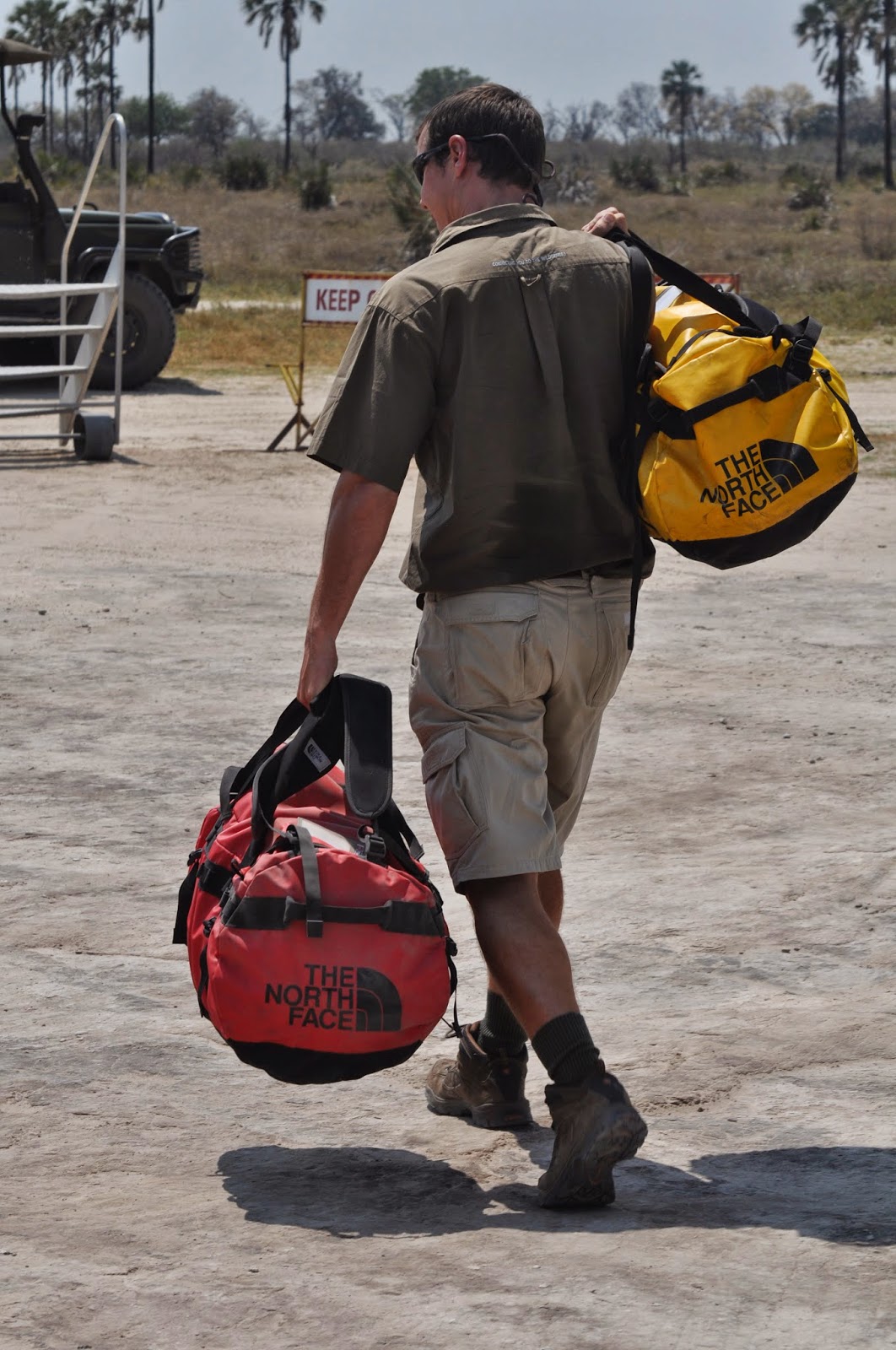 The food was a mix of mostly European fare with occasional local specialties. It was excellent and very fresh. The guides were exceptional, in terms of their local wildlife, societal, and geologic knowledge. Russell, in particular, was a gem.
Overall, we loved our trip and would gladly travel again with Wilderness Safaris.
In fact, I’m itching to do their Namibia adventure.

We used a travel agent to book the Botswana safari and the hotel for the three days we spent in Zambia. That agent has subsequently retired so I feel ok telling you about her hotel and safari selections.

Tongabezi Lodge is exceptional. The single most exotic place I’ve ever stayed. It, like much of touristy Africa, is shockingly expensive, but it was so worth the splurge. We stayed in one of five open air chalets on Sindabezi Island. They shuttled you down the river on a boat from the main lodge. There is a private kitchen on the island and all meals are served family style on the outdoor patio.

Each chalet is secluded from the others and directly on the water. 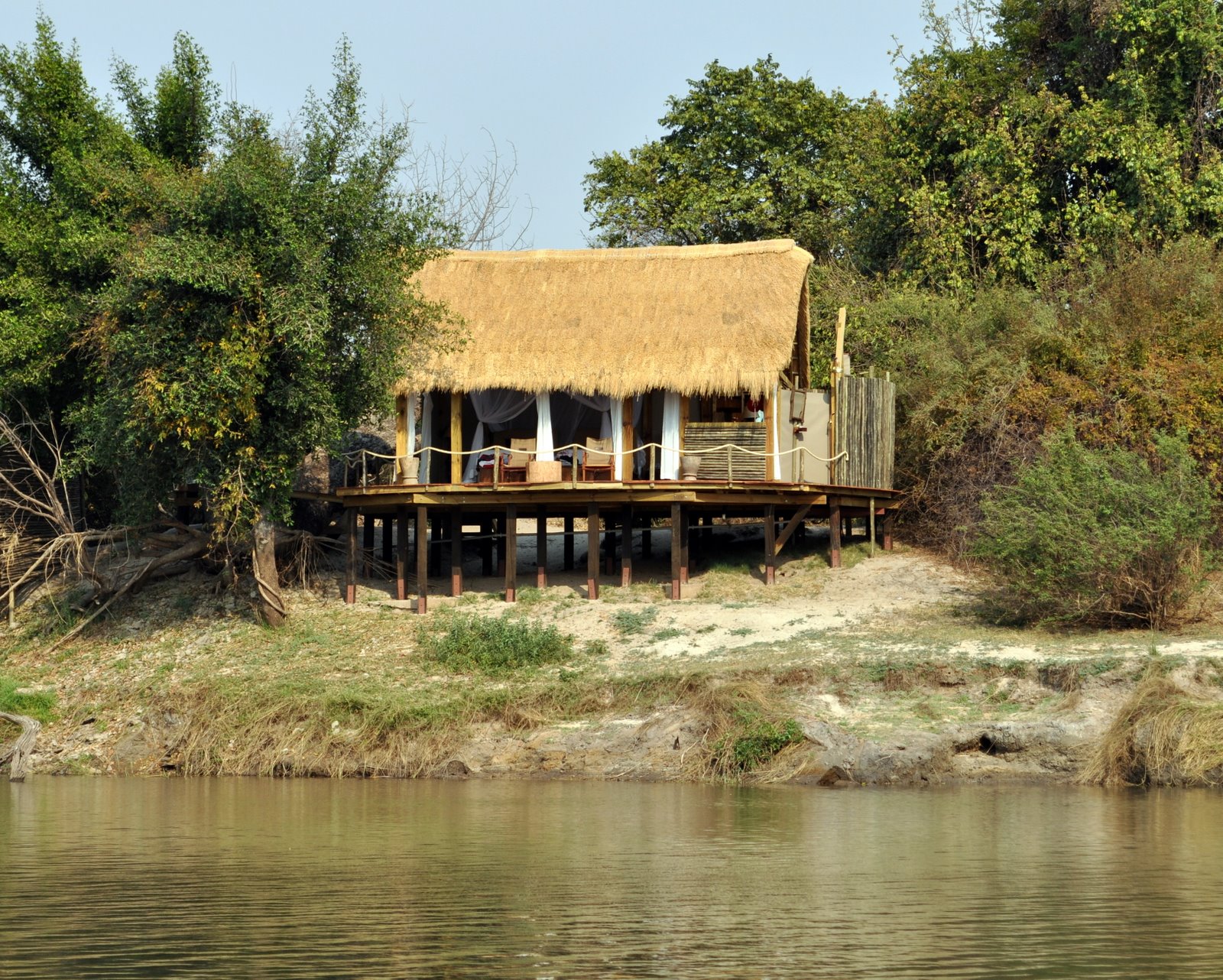 Everything, with the exception of the toilet, is open to the elements. 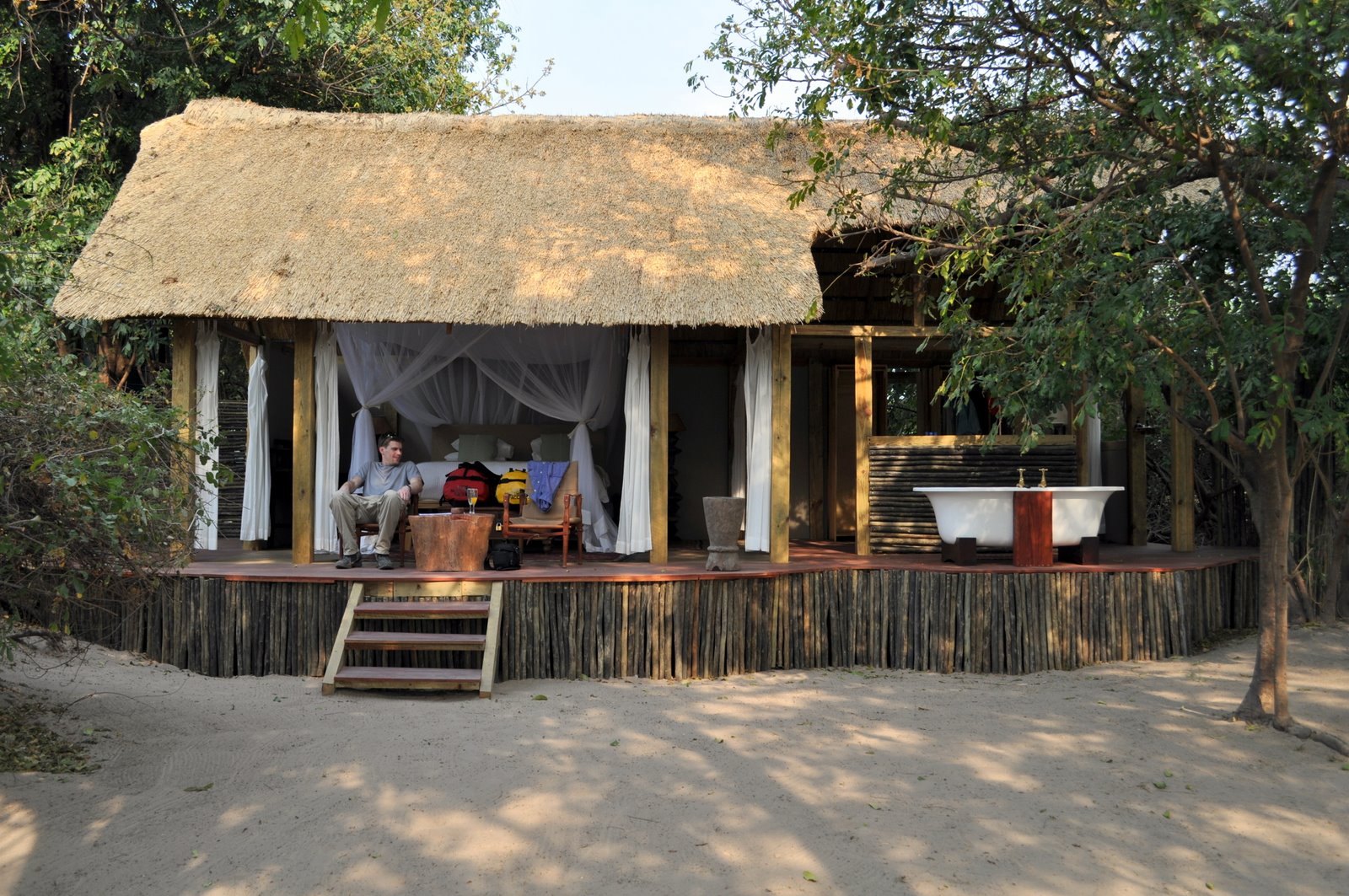 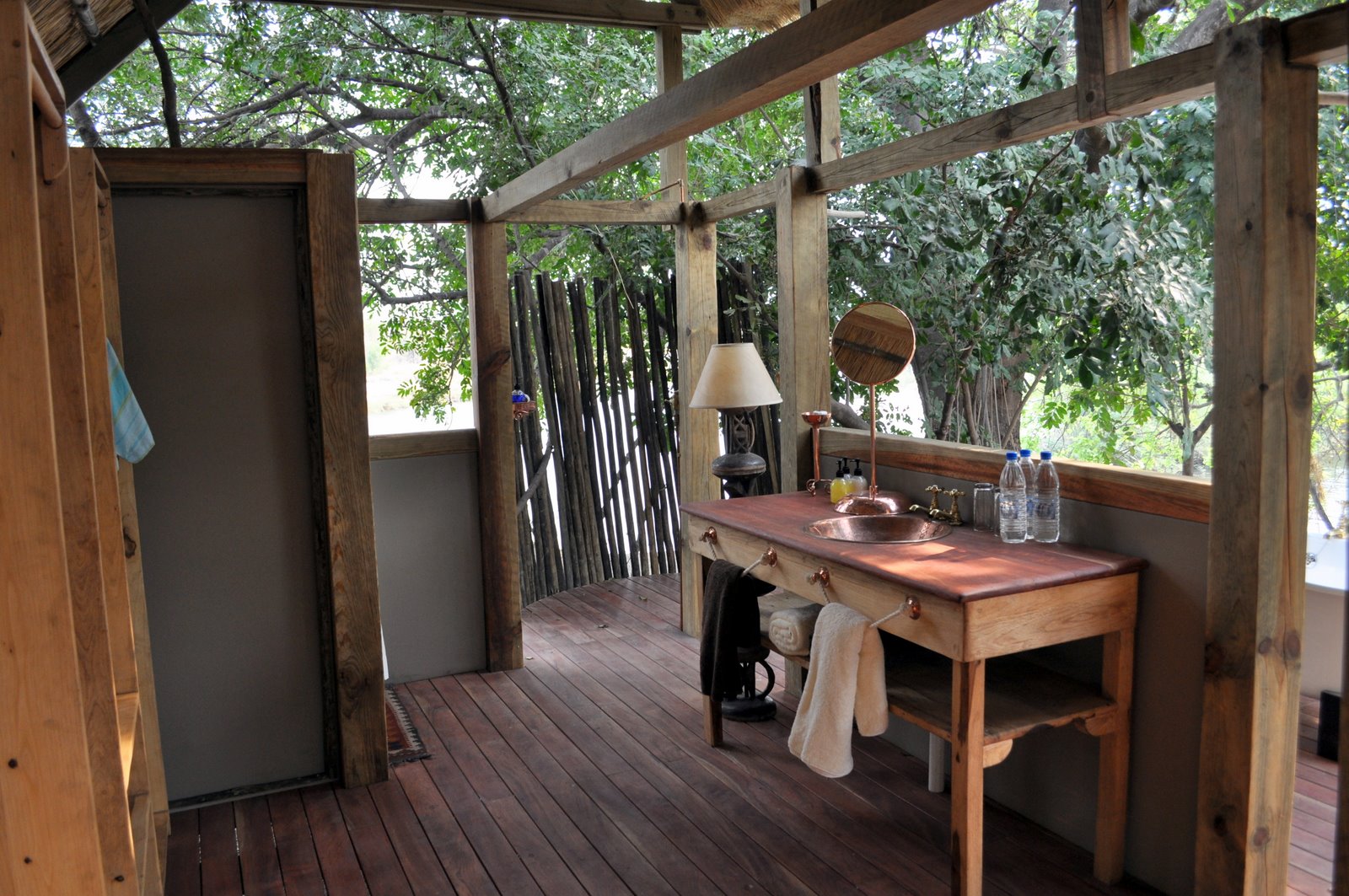 Like most of the places we visited, mosquito nets were a necessity. 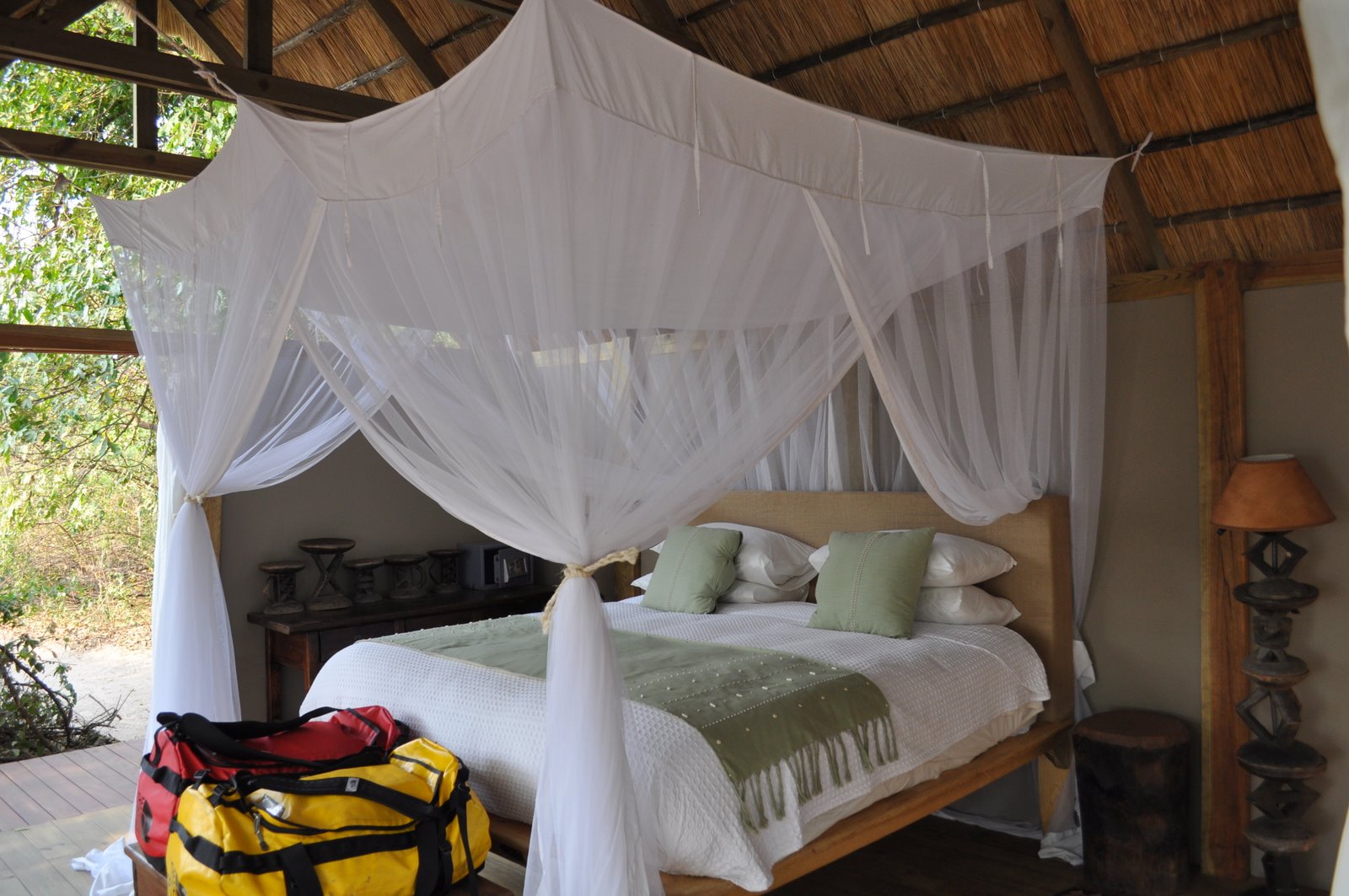 I took advantage of that tub every single night. Especially as it came with a cold bottle of champagne. 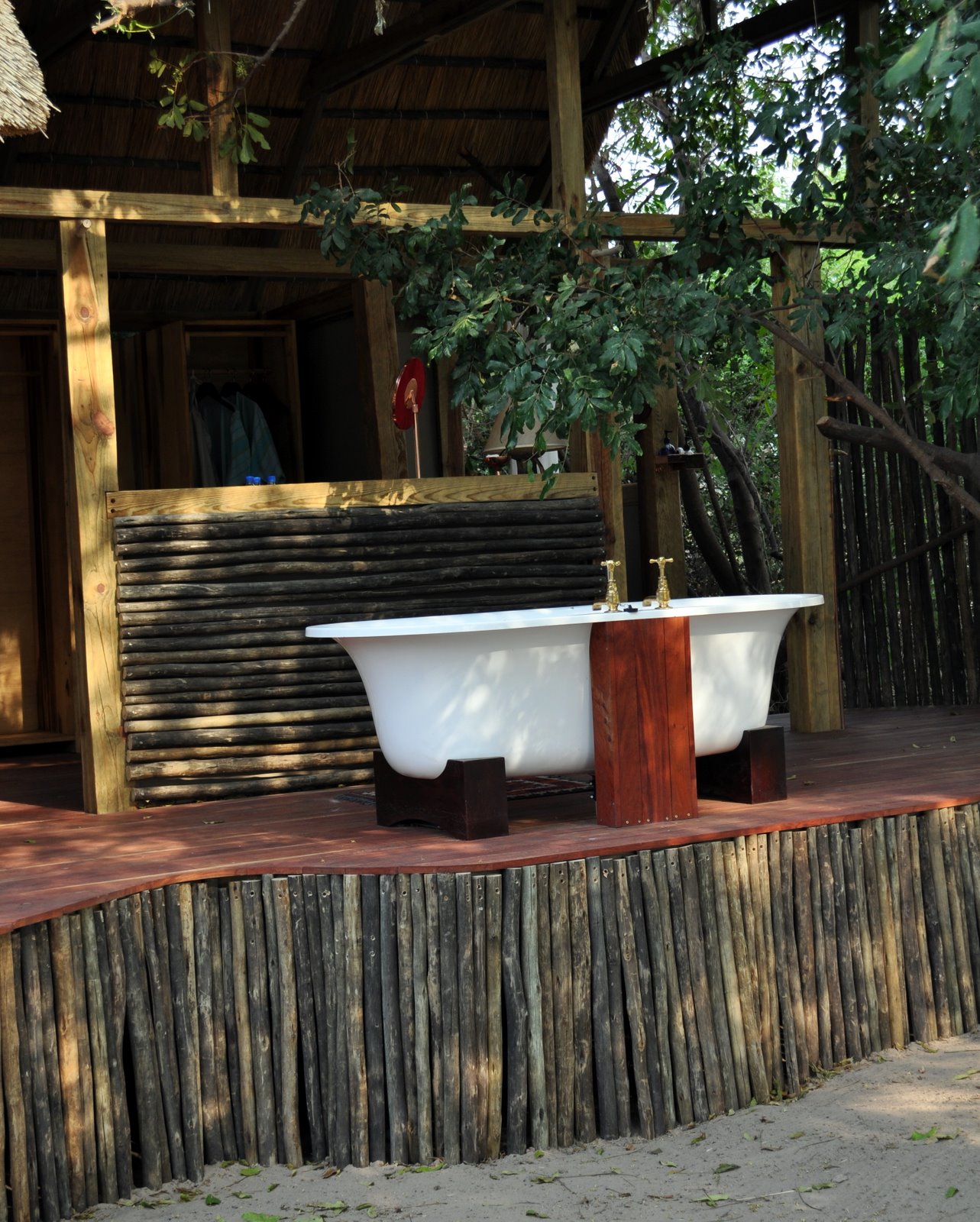 Activities include boat tours, lunch on a deserted island, and a tour of the local village. Trips into Livingstone can also be arranged.
But the must-do activity for us was taking the plunge into the Devil’s pool, a tiny bit of still water perched on the edge of the incredible and deadly Victoria Falls. It’s only accessible during the dry season but peering over the edge into the abyss is worth every penny.
Africa is the trip of a lifetime. I am so grateful that we had the opportunity to visit. One day I’d also like to bring Ben and Emma along as it would be a fantastic trip for (slightly older) kids.

Zambia
Accommodation: Tongabezi Lodge
Activity: Devil’s Pool at Victoria Falls. Enjoy high tea on Livingstone Island followed by a thrilling dive into a pool at the edge of the precipice. Requires some swimming ability.
Botswana

Wilderness Safaris. Began in Livingstone, Zambia and ended in Maun, Botswana.  All inclusive, including accommodation at four camps, food/beverages, guides, and transportation via plane and vehicle between camps.